Yaoundé is a beautiful city built around seven hills (namely why I call it the Rome of Africa). From any point of the city you can spot the peak of every hill: a green paradise. The problems lie at the base of this paradise. As the research I conduct here is targeted around HIV/AIDS, gender inequality, land and inheritance rights, I could not resist the urge of observing the living conditions and urban structure in Yaoundé.

It is understood that a clean house and a roof is necessary to safeguard one’s health and it is important in the moments of convalescence. It is not the case here where houses either have no roofs and the windows consist of a stack of old t-shirts stuffed in rectangle holes. Bastos, one of the richest neighbourhoods of Yaoundé, is filled with expensive houses and embassies surrounded by well-kept gardens. In between these imposing and well-built buildings, you find the native population who sold their lands to buy food. Yet, they kept small parcels where they built houses out of dirt which bent towards the ground at the slightest wind blow. They are not painted, nor do they have floors: they are built directly on the ground. The roofs are different pieces of metal put together simply to protect from the rain but there is never a guarantee that it will work. 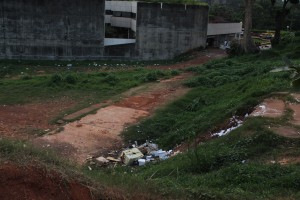 The other consistent problem is the abundance of garbage lying on the streets or thrown in the rivers. Canals are built between the main roads and the pavement to divert the rain water, but instead they turned into intense smelling garbage disposals. I pass to work a complex of apartment buildings where the smells are impossible to handle for more than ten seconds and the mountains of garbage seem to have grown higher since I got here.

The rich build houses as wide as their parcel of land and as high as to cast a thick shadow on the small houses that the poor barely try to keep standing. The discrepancy is astonishing and the images are worth a thousand words. It reflects the true structure of the society: you are either very rich or very poor. The middle class is non-existent and the poor constitute the majority of the population. Those that have the money prefer to fund soccer fields, churches or private universities. Some will sometimes even pay for street lights in their neighbourhoods but the majority of the Yaoundé areas remain unlit at 7 pm when the sun is gone. Populated areas get their lights from the little bars on the side of the road or the grill fire that the street food vendors use. 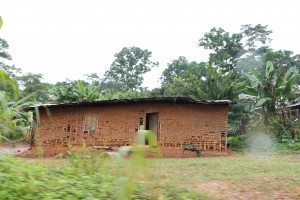 Yaoundé is also filled with half-built house: people will start big projects and will stop mid-through due to lack of money. This gives squatters the opportunity to settle in these construction sites. One 5 story building I pass on my way to work every day stands there half-finished and you cannot be oblivious to the sheets attached to the ceilings which play the role of walls.

The saddest image I encountered was when I was walking towards to the biggest park in Yaoundé situated downtown. On my way I could not stop looking at the garbage lying around in front of the prime minister’s office. I tried to look the other way and I only met the eyes of a woman who must have been around 60 years old sitting in the seat of an abandoned car. She was smiling, but her eyes were sad as she was rearranging the sheets so that the rain does not penetrate in what was definitely her home. 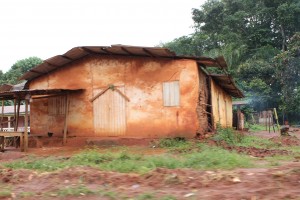 A couple of weeks ago, the garden of the house across the street caught on fire in the middle of the night. It was a sort of apartment building with a kitchen outside. While nobody was actually aware of the fire until it reached the height of the house, neighbours gathered as fast as they could to try to control the fire until the firefighters showed up. Yaoundé is the capital and, thus, the traffic is unbearable at almost any time of the day. However, in the middle of the night, any movement by car should take a maximum of 15 minutes. The firemen took 30 minutes to reach the neighbourhood and, luckily, they arrived somehow in time (regardless of the fact that the neighbours had to tear down the wooden fence of the house before it caught on fire).

I can only imagine how long it will take for an ambulance to reach a dying patient. It is not about promptness, it is about the streets that are slowly turning into red dirt. If it rains for more than a half an hour, the streets turn into fast-running rivers (in which I have fallen repeatedly). Two way streets turn into one way streets when all the cars and motorcycles drive only on the good side. The red dust fills the air abundantly every day as the car pass by hurriedly through the narrow and unpaved streets. Each time I am told: C’est la réalité de notre pauvreté.

Parks are rare to be found and those made by the government demand an entrance fee and are barely the size of the law faculty. There is no way to escape the city and its pollution, no way to escape the life and the worries. The paradise is only to be found on top of those hills where the air is still clean, the lands virgin and the quietness is only interrupted by the sound of birds singing the day away.