One of the cultural differences I notice, is that when Americans speak about whether Obama should intervene militarily in Syria, there is a certain heft to their consideration. As a Canadian, my impulse is toward diplomatic solutions, perhaps reflective of my status as a citizen of a middle power and realistic in terms of the action I might expect of my government. It also leaves me with less responsibility for the tough decisions. After all, Canada would only ever be a member of the “coalition of the willing”, not the spearhead. Does the relative effectiveness of our national strategies to enact global political change impact the depth and tenor of our respective cultural dialogues and moral deliberations ? 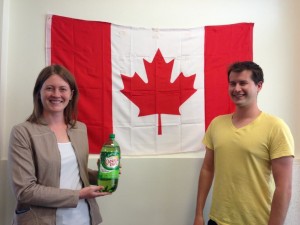 At the Canada Day party thrown by our American colleagues

We sat down to discuss different options in Syria as part of our reading club. Syria is starting to be seen by some as as a failure of the Responsibility to Protect (RtoP) resolve to intervene to protect civilians from war crimes, crimes against humanity, ethnic cleansing and genocide (Stewart M Patrick, online: <http://www.theatlantic.com/international/archive/2013/06/does-syria-mean-the-end-of-the-responsibility-to-protect/276866>). As recently as 2011, RtoP was invoked by the Security Council to authorize “all necessary measures to protect civilians” from widespread and systematic attacks by the Qadhafi regime in Libya.

Our group agreed at least on the minimization of Syrian civilian deaths as a moral good. Yet, we totally disagreed on the strategies, and I noticed my naïveté and discomfort with the language of geopolitics. Over the course of an hour, an initial position advocating for intervention in support of the Free Syrian Army’s just cause had been substantially counter-weighted with an empirical argument in support of al-Assad as the most likely candidate to end the conflict first, thus minimizing the number of deaths. The consensus in the room had started to converge toward the option of the US doing nothing, although really no conclusion had been reached. Of course, we all seemed to agree that everything that could be done from a humanitarian perspective should be immediately deployed, just short of intervening in the civil war. When asked for our Canadian perspectives, I said something about Canada as a peace broker to resolve the larger political tensions in Syria, convening Russia and the US, the new Iranian president and the Saudi Arabian leadership. 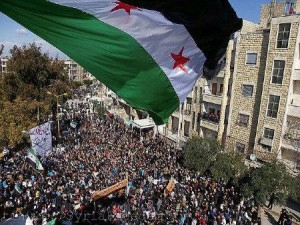 It was a deeply uncomfortable human rights conversation in a conference room in Broomfield, CO, about the lives of people in Aleppo, Homs, Qusair, Khalidiya and other Syrian communities. The vision of the One Earth Future Foundation, “an Earth beyond war”, started to seem remote, as did the the RtoP principle of “respond(ing) to situations of compelling human need” (ICISS, “The Responsibility to Protect: Core Principles”).

Overall, looking forward to resolving some of the ambiguity I feel, and perhaps accessing better tools for deliberation in human rights, especially for discussion of the jus cogens crimes / human rights violations covered under RtoP.

And, appreciative of the opportunity to have my deeply Canadian peace-keeping assumptions thrown into sharp (geopolitical) relief.