I spent most of this week on a “field visit”. With a few colleagues, I went to a remote district of Uganda to interview doctors and residents about the state of healthcare in their district and what they wanted to improve. Being the junior member of the team, I acted as a photographer and occasional recorder.

~Background~
Healthcare in Uganda is, in principle, universal and public. There are government health centres throughout the rural districts, varying in size from the tiny Health Centre I, which provides basic counselling, injections, and tests, to the Health Centre IV, which is effectively a mini-hospital. We interviewed the “in-charge” at several health centres of sizes II to IV.

~The standard line~
The in-charge of a health centre is always a doctor or a nurse — a civil servant. When you ask Ugandan civil servants about their situation, their responses follows a standard formula. They share a comprehensive list of problems, which are both numerous and drastic, but their tone treats each problem as a little storm that they are weathering in an otherwise smooth sea, even when the problem means patients dying en masse.

We don’t have enough of the vital medications, says every in-charge we interview. We have an anaesthetic machine, but no nitrogen or oxygen, or for that matter anaesthetic. If we refer the patient like we’re supposed to, the next centre won’t have supplies either, and the patient will die before they reach someplace that does. We have no water, just a cistern. There’s an electrical pole on the grounds, but we haven’t been connected. There is no incinerator, so if an epidemic starts in the hospital it will spread to the whole district as birds carry away the medical waste.

Then, at any given health centre, the in-charges give us a tour of the health facility. He shows us crumbling buildings with beds either missing (never delivered) or broken and filthy. He points out the gurney that, for lack of a spare, has to run between the operating theatre and the ward, so that germs travel with it between the rooms. He shows us the enormous crowds of listless patients.

And all the in-charges smile helplessly, and sometimes they laugh.

~Throwing up your hands~
My last interview is with the in-charge at a higher-level health centre.[1] We read him our normal questions: what do you think about the legislative Health Care Package, how should we change the Millennium Development Goals, what problems do you face, etc. The doctor responds with the normal answers and follows the standard line.

About thirty seconds after we have asked our last question, the in-charge suddenly gets angry.

— There are procedures that I know how to do, but I can’t do them, because I don’t have the materials I’m supposed to get. And they send us the right number of cartons, but then you open the carton, and there’s just one tin of medicine in the bottom and the rest is empty. The people see I get boxes and boxes of medicine, so they think I am holding out on them, but I don’t have what they need.

What the in-charge means is, his patients think he either is stealing the medicine for profit or wants a bribe. Both happen regularly in Uganda, though the government is trying to crack down on it.

— The test kits for malaria are low-quality — they keep giving false negatives. We aren’t supposed to treat someone unless it’s positive — but I know what malaria symptoms are! And if you send someone home, they’ll just come back the next day with complications. So what to do?

The in-charge and my colleague digress into their experiences with malaria before the in-charge returns to his complaint.

— I have IV equipment, but I don’t have any saline solution. So what am I supposed to do if someone is dehydrated? I can do great work if I have surgical gloves. But I don’t have any. I tell my patients to bring them to me, but they cost three thousand shillings,[2] and they can’t afford that. So I can’t help them. What do you say about that?

The doctor and my colleague look at me expectantly. Happily, six years of education at McGill have honed my impromptu analytical skills.

— It’s crazy, I say. The other two accept the answer.

With the interview completed, we follow the in-charge outside, where a pair of women are waiting awkwardly in the shade.

— I bet they brought razor blades.

The in-charge snaps at the younger woman in the local language, and sure enough, she hands the doctor a safety-razor blade in a paper wrapper. He unwraps one edge and holds it up to my camera. 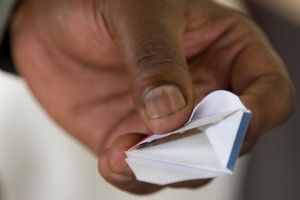 — She has sutures that have to come out. But do you think this razor is sanitary? I’m not allowed to use it. But I don’t have any surgical blades, and the sutures will start tearing soon. So what am I supposed to do?

My colleague says that he probably shouldn’t use the razor blade — if there is an infection afterward, the woman might discover that she can sue him, and win. But the in-charge rewraps the blade carefully and hands it back to the woman before we walk away. The sutures have to come out.

As we say our goodbyes, the in-charge remembers that he is Ugandan.

— We’re facing the challenges, but we’re working through it, he says, shaking our hands.

I am not Ugandan; I believe his anger more.

~Weekly miscellany~
• Rural doctors generally assume that Mulago Hospital, the national referral hospital in Kampala, will have adequate medical supplies. When I mentioned to an in-charge that Mulago regularly runs out of basic necessities, he was surprised and unimpressed.
• Some highways have enormous, bold-lettered signs along the road providing such sage advice as “SAFETY FIRST”, “DRIVING ON SHOULDER PROHIBITED”, “SPEED KILLS; DIVORCE IT” and, oddly, “AIDS KILLS”. Just in case drivers are having unprotected sex as they drive down the highway, I guess.
• Uganda has a government newspaper, the New Vision. It publishes a weekly children’s supplement, consisting of the sort of kids’ games you would expect. One such game is a “spot-the-difference”, in which the two pictures are of “your hero”, President Museveni.
• Among African countries, the national football team’s jersey reads like a commentary on the country’s state of governance. Uganda’s jersey is okay but changes constantly to meet the advertising needs of the team’s sponsors, Nigeria’s is quite professional, South Africa’s is European-level, South Sudan’s is really just a logo on a plain jersey, and the DRC’s makes elementary school jerseys look high-quality by comparison.[3]
• Another tasty soft drink: Stoney Tangawizi, a Coca-Cola product. It’s essentially ginger beer. I’m not generally a ginger beer fan, but this one tastes a bit different.

~Footnotes~
[1] I do not have the recording of this interview, and it was not written down verbatim — I am going off memory and basic notes as best I can. Hence, this account is impressionistically faithful but ultimately consists of paraphrases, not actual quotes. It is also compressed, for the sake of space.
[2] About $1.20. A high-up district leader we interviewed earlier in the week figured a poorer family of six might earn 700,000 shillings per year — about 15¢ per person per day — so $1.20 is serious money.
[3] And you can totally expect to see me wearing my red DRC jersey proudly in the halls of McGill next year. Or either of two Uganda jerseys, or a long-sleeved South Sudan jersey. Or any of several non-African jerseys. They’re really cheap, okay?