“Do you like football?” I asked one of my colleagues at the Institute for Human Rights and Development shortly after my arrival.

“Do I like football?” he answered, surprised. “My passion for football…is outrageous!”

From this moment, I knew I had come to the right place.

Spending a World Cup summer in Africa has been a thrilling experience. But 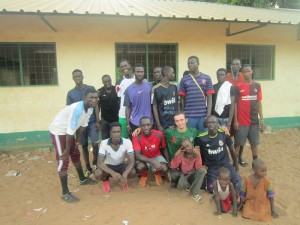 my aim is not to comment on topics such as Holland’s thumping of Spain (after all, a 5-1 score line speaks for itself). Rather, I would like to share some anecdotes on football in The Gambia, and highlight the ambiguity of the sport’s relationship to global migration and inequality.

Undeniably, football has the capacity to efface social, racial and economic barriers more efficiently than any ideology or political program.

From time to time, after work, the neighborhood’s kids and the landlord’s grandson knock at my door and invite me to play. The former wear worn-out shirts with holes in them, most of them do not have shoes. The latter collects his favorite teams’ jerseys and proudly wears his Cristiano Ronaldo cleats. I stand in the middle, wondering how a 9 year old managed to dribble past me.

There is no hostility between us. As I watch the kids run, laugh, and emulate their football heroes, I know that the love of the game has taken over. 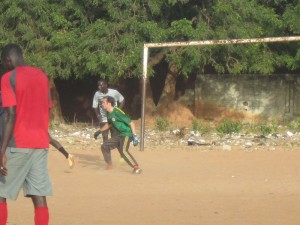 A few days ago, I decided to try my luck with the big boys at the local football field. Plastic bags litter the edges of the sandy pitch and goats occasionally make a run across the goal line, but this does not stop dozens of athletic young Gambians to practice for hours every day following professional training routines.

I joined one of these exercises and almost fainted after 30 minutes, but my efforts were ultimately fruitful: I am now the second goalkeeper for my neighborhood’s team.

My teammates are very aware that I come from a country where lawyers charge more than three times their monthly salaries – per hour. But on the pitch, I am their goalkeeper, their teammate, and their friend.

So while the World Cup’s song is dreadful, its title “We Are One” has some truth to it.

After the closing prayer ended the practice, one of my teammates introduced himself.

“I am from Scotland, I got deported!” he said.

“Me too, in Morocco!” replied his friend.

The social realities underlying footbalistic dreams suddenly flew in my face. My teammates are the people that drown at sea, a few nautical miles from fancy Italian beach resorts. These are the individuals that leave everything behind in the hope of entering Fortress Europe.

By now, most of the Gambians I have played football with have attempted to migrate to Europe, unsuccessfully, and at a great peril. I asked one of my colleagues why the frequent horrendous drowning in the Mediterranean are not deterring these youths.

“They will not listen to you.” He explained. “If you tell them that they might die in the crossing, they will answer ‘I am dying here anyways, so I might as well try my luck’”. Four years of international development studies did not provide me with an answer.

Then, there are also the “pull” factors. One of my good friends, a talented striker, was showing me Facebook pictures of his cousin posing like a football millionaire with original Adidas wear and a thick silver neck chain. He managed to cross over to Italy.

“But what would you do in Italy? Life is difficult if you are not legal there”, I told him.

“I will play football.” he replied.”

It is no great surprise that The Gambia was recently expelled from FIFA when the organisation discovered that half the players on the team had lied about their age (which is rather easy to achieve, as most young Gambians do not possess identification documents). 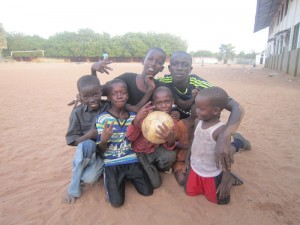 Of course, some of those who dream big make it. After all, amidst growing xenophobia, my national team continues to provide the football world with migratory success stories. For instance, midfielder Rio Mavuba was born stateless when he arrived in France as a refugee for the Angolan civil war.

I was happy to find out that many Gambians support Les Bleus. Yet I know that France’s “generous” immigration policy towards talented footballers is offset by the interior ministry’s unyielding efforts to meet his expulsion quota for “illegal” migrants.

“One day I’ll come to Canada, and we’ll play football there.” my striker friend once told me.

I truly wish that he could be right. But I know the governments we elect will be as dogged in preventing his entry as I am committed to stopping the ball from entering the net. Indeed, while football is a great equalizer on the pitch, it is deeply scarred by inequalities on the global playing field, where referees wield police batons.