It’s been a little more than a Month since I started my internship at the LICADHO in Phnom Penh. The adaptation to the hectic capital city of Cambodia took some time, but I settled into a nice little routine and now enjoy some of its charms while I focus on my work during week days. 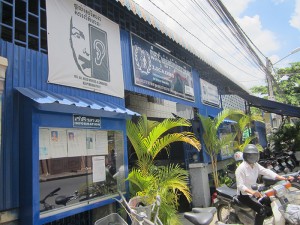 Speaking of work, I arrived in Cambodia during important times and events regarding freedom of assembly in the country. This, as I would find out, would be the major topic of the year with regards to human rights. In fact, the government had issued a ban on public gatherings on early January, following massive protests from Garment workers and human rights activists. This ban has now been set aside, but gatherings and marches are each time met with heavy forces in order to intimidate the people.

I came in Cambodia during the hearings of high profile cases regarding crackdowns that occurred during these marches at the beginning of the year. While this timely arrival delayed my internship, LICADHO not having the human resources to welcome me among its team, the NGO recommended that I followed the events closely, which I did (I will post an entry specifically on the subject shortly).  As I started, we could sense that the organization was recovering from a long struggle the drained its time and energy.

That said, my tasks here since I started mostly consisted of helping the staff to get back on track with most of their activities. This is how I helped LICADHO as of today. I was asked to assist the organization in compiling data and writing different sections for its 6-month report. I also transcribed notes from the testimonies of the trials for the 23 accused of the high profile cases, to be put to use on a later date when we will focus on the defence for the appeal (which will surely happen).

I was also tasked on written a graphic report on the different Police forces, what distinguishes one from the others, and their powers and limitations. This is quite important for people are confused in light of the enormous amount of departments, jurisdictions, and uniforms. More importantly, some forces do not have the power to arrest people unless a flagrant crime is committed in front of them. However, as Cambodians do not know their rights and the limitations of these forces, officers may abuse their power and illegally arrest or detain people.

Other small tasks have consisted, for the moment, on working on the photo database, doing research for land eviction cases, supporting detainees in Municipal court, and monitoring protests.

These are interesting and changing times for Cambodia. My position in LICADHO enables me to learn rapidly and in depths about the occurring events. Hence, through this blog I will be sure to address some issues specifically. Stay tune for the next few entries…