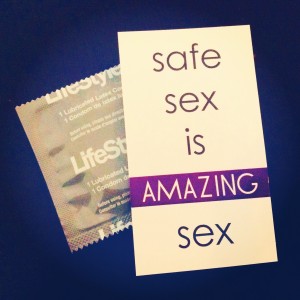 Four girls in downtown Toronto, a little bit of gin, and a conversation about one-night stands. It didn’t take too much time before we argued the proper etiquette to adopt before engaging in some gymnastics under the sheets with a total stranger. Each one of us had a different idea of what was appropriate to ask, what we should expect from our partner… and how these opinions would be completely different if the other person was actually HIV-positive. One of us said, quite categorically, that she would never sleep with someone who was HIV-positive, even if he’d wear a condom. ‘’You do know that there’s no risk of transmission when a condom is used, right?’’, ‘’I don’t care’’.

This remark made me cringe. As an intern at the Canadian HIV/AIDS Legal Network, I learned all about the myths surrounding HIV transmission and how these misconceptions negatively affect the lives of people living with HIV. Yet, I couldn’t blame her for saying that; I’m not sure my opinion three months ago would have been much more different from hers. It is scary to realize that we were four educated girls, but we had such a poor understanding of how HIV may be transmitted. And I wonder whether the law is not in fact perpetuating (if not strengthening) this misinformation and therefore this stigma and discrimination around HIV.

Indeed, the Supreme Court of Canada’s rulings on HIV non-disclosure fail to reflect actual scientific knowledge on the matter. Under Canadian law, HIV-positive individuals may be charged and convicted of aggravated sexual assault if they do not disclose their status to their sexual partner unless they use a condom and have a low viral load. This is in contradiction with scientific and medical evidence which establishes that the possibility of transmission is negligible, or even nil, when only one of these requirements is satisfied. With such a legal interpretation, people living with HIV end up being labeled as criminals even when their actions pose no realistic possibility of transmission.

So I wonder what makes us think there’s a risk. Science doesn’t seem to have much influence on popular beliefs. Every time I mention the current state of HIV-related science, people tell me that it doesn’t matter, they wouldn’t want to take the chance – ‘’it’s too risky’’, they say. On the other hand, they do believe that our highest court is right in criminalizing such sexual behaviours. So are we keener to believe the law over science?

And what exactly is our responsibility as individuals to protect ourselves? In a generation where casual sex is more frequent, is it ever realistic to expect our sexual partner(s) to reveal such an intimate part of their life? Do we have to expose our whole life story every time we take off our clothes, especially to individuals we may perhaps never see again? Those in favour of non-disclosure prosecutions argue that individuals ought to be fully informed before taking a decision on whether to accept or refuse sex. But it’s hard for me to see how this rationale for HIV criminalization could stand. Considering that the scientific consensus is that the risk of transmission is negligible or nil, I don’t think a ‘’right to know’’ is defensible. How far do we want to go about the vow of telling ‘’the truth, the whole truth and nothing but the truth’’? Such a vow may exist in courts and Hollywood movies, but it has no place in our bedrooms.

To be clear, I am not arguing that people should change their mind about having sex with HIV-positive partners on the basis that their fears are unfounded – absolutely not! No one should have to justify why they would or wouldn’t want to sleep with someone. But what I’m asking is: should it really be a crime not to disclose your status? Given that there is no realistic possibility of transmission, the answer seems obvious to me. Where there is no intention of transmission and where the HIV-positive partner had a low viral load or a condom was used, this sexual behaviour should not constitute a crime. As a society, we should give more weight to scientific facts in the establishment of our policies and laws. The four girls living in downtown Toronto, as most Canadians, respect and trust the authority of our judicial institutions and their rulings can have significant impacts. Therefore, our courts have a responsibility to ensure we do not discriminate against some groups in our society, including people living with HIV.