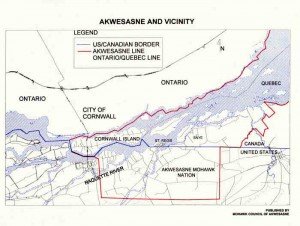 Learning about the geography of Akwesasne is essential to understanding the daily struggles of the Akwesasne Mohawk Community, and the jurisdictional conundrums that were at the heart of my research this summer.

I will take you through my daily drive to get to work and back, which begins to give you a sense of the complexities underlying the Akwesasne territory. I resided in the City of Cornwall, and was working at the Akwesasne Justice Department in Kanakaton (St Regis). Leaving from Ontario, the first stop is a bridge toll for the Three Nations Bridge, which crosses the St Lawrence River to Kawehnoke (Cornwall Island), connecting Canada to Akwesasne. The Island, as the locals call it, is the part of the reserve situated in Ontario. 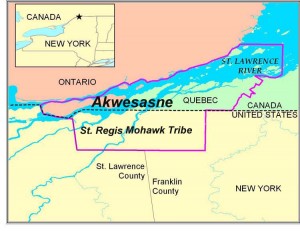 Getting off the bridge, it becomes clear that you’ve entered a different Nation. You soon see a Haudenosaunee (Iroquois) Confederacy flag, a tax-free gas station, road signalization and advertisement in the Mohawk language, a sign saying “You Are on Indian Land”, and another “Cocaine and crack will cost you more than money”.

Within a few hundred meters, you come to a stop sign, which stands in front of an abandoned Canadian border-crossing checkpoint. The Cornwall Island port of entry was closed in 2009 as a result of protests resulting from the Canadian Government’s decision to arm border agents. The Akwesasronon (the people of Akwesasne) refused to have armed CBSA agents in a residential area.

After you pass by the abandoned border station, you reach the foot of a bridge, which marks the Canada-US border. On your right you will see the Aluminum Corporation of America plant (Alcoa), which in 2013 negotiated a $20 million with the Mohawks for a more than 60 year legacy of polluting the St Lawrence River Watershed. These seriously inadequate funds are intended for the restoration of recreational fishing, fish and wildlife, and Mohawk traditions and languages. On the other side on the bridge, you soon come to the Massena US border checkpoint, situated on the US-NY state side of Akwesasne. 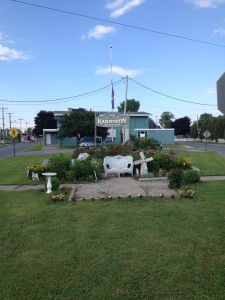 A sign bearing the message “Welcome to the Empire State” greets you at the first traffic light, which leads you on to the prosaically named Road 37 that crosses the Raquette River taking you through “US side” of Akwesasne.

Here one views more tax-free gas stations, both of the operational and abandoned variety, an abandoned Casino, craft-stores, outlets for tax-free tobacco and alcohol, and several Tribal administrative buildings. After ten minutes, you turn left turn just before crossing the St Regis River.

The smaller road that brings you to Kanakaton stretches through a residential area on the US side. Owing to a lack of zoning regulations the houses are aligned in an unconventional way on this part of the road, and properties are rather large. However, the landscape drastically changes once you arrive at Kanakaton, commonly referred to as “the Village”. Streets are smaller, narrower, properties are smaller and it is more densely populated.

When you arrive at the Village on that small road, it is easy to not realize that you have crossed the Canadian border. Apart from a small seam in the road where the American paving crew stops and the Canadian one begins, and some metric signage, there are no landmarks suggesting that you have entered Quebec.  No border crossing checkpoint, no sign, so surveillance camera, etc. Yet, for non-Akwesasronon, missing the border can very costly.

Although there is no checkpoint in St Regis, there is a border, and it means that since you have entered Canada, as a non-Indigenous person, you have to report at one of the US border checkpoints, be it Massena, Fort Covington, etc… when you leave the Village to go anywhere else in the US or on your way back to Canada. Furthermore, once you leave St Regis, you are not allowed to stop anywhere in the US before “reporting in”. If you fail to report in or stop somewhere on the way, the US border agency can impound your car and charge you $1000 to retrieve it on the first occasion, $2000 for the second, $3000 the third time, after which they will confiscate it permanently.

Returning to the City of Cornwall from the Akwesasne Justice Department, you must first stop at the Massena US border checkpoint. You have to park the car, go inside the building, and show your passport. The first few weeks, I was asked by the border agents whether I had stopped anywhere on US territory on my way back from St Regis, and whether I had bought any goods in Canada. After a month of stopping everyday they ceased to ask me any questions or look at my passport. They would say “Reporting in? You’re set.  Free to go.” You might, as I did, find this attitude upsetting, as Akwesasranon waiting behind you receive a very different treatment from border agents.

Once cleared, you drive back across the bridge to Cornwall Island, and have to make sure to not stop anywhere on the Island as you make your way to the Canadian border check-point. You must head straight to the Three Nation Bridge, cross the St Lawrence to Mainland Canada, pay a $3.25 bridge toll, then pass through the Canadian border checkpoint. It’s only at this point that you may backtrack to Cornwall Island if that is your final destination. 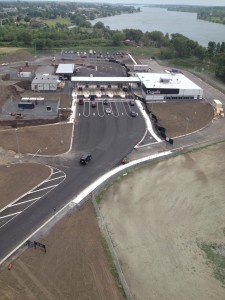 Again, it is because Cornwall Island is technically Canada and there is no border crossing on the Island, you are not allowed to stop on your way, and must head straight to the Canadian border checkpoint. If you don’t follow these rules, this time you risk the Canadian officials confiscating your vehicle. However, and importantly, Canada is less flexible than the US, and applies this rule to Akwesasranon and non-Akwesasranon alike.

I will leave it at that for now, and look forward to telling you more about my work at Akwesasne, and hearing about your experience on Friday. Happy Labour Weekend! Oh, and if you’re interested, Akwesasne is having one of its most anticipated events of the year next weekend, check it out at: http://www.akwesasnepowwow.com/. In July, I went to the  Kanhawake Pow Wow, and it’s worth the trip!