It’s hard to believe it’s already been over a month now that I’ve been working at the First Nations Child and Family Caring Society in Ottawa. I have had the opportunity over this time to work on some interesting things, to consider some important questions and compile a lot of information. There are times where it feels like I’m waiting for my true work to begin here, which would likely occur if the decision for the Caring Society’s case in front of the Canadian Human Rights Tribunal actually comes out while I’m here. But it is neither my current, nor my potential future work that I want to talk about today. Instead, it is the work of the past that I would like to focus on. I always find the best place to start with is the past, and it is something that has been occupying my mind of late.

When I first started working here, I did a lot of reading and researching to get caught up as much as I could on the history of the case, the projects that the Caring Society espouses, and context in which the original complaint was filed. Throughout all of this, I felt overwhelmed at what I had just stumbled into the middle of. The amount of time and work that had clearly gone into all of these initiatives was intimidating, from the lawyers in the court case, to the children who have participated year after year in the annual events the Caring Society helps to organize. Factums had been written, awareness raised, partnerships and alliances created, and steps had been taken (both literally and figuratively).

It was around this time that I realized that this internship never really was, and certainly never would be just about gaining professional experience and course credits. I can’t help but feel as though the work, passion, and sacrifice of all the people that have contributed to these initiatives and continue to do so, impose a responsibility on those who come after them to match that effort, to see their work continued and hopefully one day completed. The fact that I am only here for three months does not diminish this feeling; in fact it intensifies it in that I hope in this short time that I am able to make some sort of meaningful contribution in turn.

The Caring Society itself is made up of people who fit this description of hard work and an intense passion. It is an organization that operates nationally, that plans and coordinates events, that conducts research, that coordinates with other organizations, participates in conferences and events, and that throughout it all still manages to engage those for whom it advocates, children and youth. All of this with only three permanent staff members. Even considering all of this, I think that they would agree with me that it is actually this last group, the children and youth, that most incite this feeling of responsibility. They have so much to contribute and in too many cases, have sacrificed too much already.

The main focus of my time here so far has been to examine and engage with Jordan’s Principle. Briefly, Jordan’s Principle was created in memory of Jordan River Anderson from Norway House Cree Nation. Jordan was born with multiple disabilities and lived all five years of his life in a hospital because the Federal and Provincial governments could not agree on which one of them would pay for his home care. This Principle is meant to resolve such jurisdictional disputes by putting the child first and was unanimously endorsed in the House of Commons in December 2007 but the government’s implementation of it has narrowed its applicability and ultimately failed these children.

I have also had time to look into another initiative known as Shannen’s Dream, named in memory of Shannen Koostachin who was a strong advocate for the right of Aboriginal children on reserve to safe and comfy schools, and a culturally based education. These two Aboriginal children and others like them have become the true inspiration behind the Caring Society. The statistics on First Nations child welfare services, education and health care are abysmal and show that Aboriginal children are facing a dangerous mix of systemic issues and inequitable treatment. The need for their voices and experiences to be heard in all of this is significant.

There are young people who have stepped up and certainly others who will do so in the future. I have met a couple of them already and it is clear to me from what I have seen so far that their years (!) of being involved with the Caring Society have set the bar quite high in terms of their commitment, energy and the impact of their message.

I would like to conclude by saying that over the last week or so I have had the privilege to attend a few of the events related to the release of the Truth and Reconciliation Commission’s work over these last seven years. Perhaps this is part of the reason for my recent thoughts on the past, whether it be mine own, my family’s, that of the Caring Society or of Canada’s. It is the perfect example of a lengthy body of work by dedicated and intelligent people through which they have made an incredible contribution to our society, expanding our knowledge and with time, hopefully our collective understanding. I am hopeful that in light of this report, that many people across the country are now feeling this same sense of responsibility that I have had since I first started here and which has continued to grow, especially now.

It is not and should not be a feeling of responsibility rooted in guilt or pity, not one that was created out of the negative of the past even while it must recognize what occurred and the ongoing effects that were caused. Instead, I think it is a responsibility based in the work, struggle and courage of those who came before, each within and defined by the context of their time and their personal circumstances, it is a responsibility sustained by the hope of a better future.

Perhaps there are others who are feeling this same sense of responsibility in their own organizations around the world, working on different issues, in different contexts with different histories. I doubt however that there are many that lack a similar history of passion and commitment as I have experienced. I guess what is really resonating with me at the moment is the current sense of hope, that all of the effort and sacrifice may actually be leading us somewhere positive, and that we’re gaining momentum on that path. 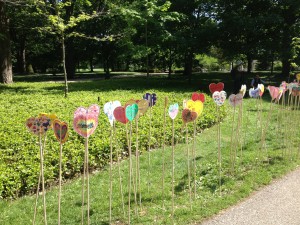 Here are some links to sources that may be of interest. The Caring Society website will provide more information for anyone curious to find out more about Shannen’s Dream or Jordan’s Principle. The focus of the Caring Society has historically been on First Nations Child welfare issues. I have attached a link to the Wen:De report, which provides some of the statistics and issues relating to First Nations Child welfare in this country.

For those interested and who have not already seen, here is the link to the TRC’s findings that they released this past week. They released their executive summary, their 94 recommendations, their principles for reconciliation and excerpts from testimony of some of the survivors, all of which can be found at this link.