I have crossed the half point of my internship in Kenya, and although this blog post was originally going to be about my experience as a white (mzungu [1]) girl in Kenya, I realized that there was something more important that I could share.

I am a law student, and while at law school I have learnt about substantive law and procedure, here in Kenya I have learnt that being a lawyer is not only about what you know but it is also about the relationships you are able to build with the people around you. In other words, relationship building has proven to be a key element of my work here in Kenya and I want to explain why.

As I had said in my earlier post I am working with the social workers of an organization that seeks to protect and bring justice to girls’ victims of sexual and physical abuse. The job involves going through their files, filling in forms, attending court to monitor their cases and going to police stations to inquire about the investigations. While going through the files and filing in forms are standard activities in most law-jobs (or any desk job for that matter), I have come to realize that the biggest and most important part of my work has been the fieldwork because of the human component. Indeed it is through my fieldwork that I have had the opportunity to meet and establish a relationship with police officers, magistrates, prosecutors, and other relevant stakeholders. These relationships have allowed me to learn much more than most of the paperwork because I have been able to engage in meaningful discussions about the law in Kenya, the value and place that children should have in society, and the different challenges that these stakeholders are facing when trying to seek justice for these girls.

Part of the benefits of making contacts and establishing good relations with the different stakeholders, besides their willingness to help when you are trying to inquire about a case, is the network of key people that you can build. For instance, every time my co-intern and I go to a police station for the first time we make a point of meeting the officer in charge (OCS) and explaining the purpose of our visit. More often than note, the OCS are very happy to greet us and have many questions for us (probably because we are white girls in very rural Kenya). However, regardless of whether my whiteness has a part to play in the way some people welcome us here, the relationships that we have been able to establish with our visits have proven to be very important. 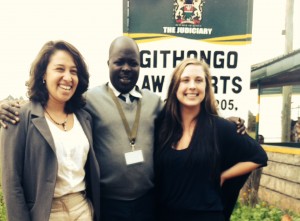 In one particular occasion, after we explained who we were and why we were there, the police officer in charge invited us to his office and began to tell us why he (unfortunately it is usually a he), appreciated our work and why he thought more organization like Ripples were needed for Kenya’s victims of abuse. Essentially, while waiting for a the police file of the girls we were inquiring about, the OCS told us about the biggest challenges he was facing and confided in us what he thought would be a good course of action for these girls. That conversation was much more informative and fulfilling than any paper work I had done.

There was another occasion when we went to a Law Court to get a copy of a judgement for a girl’s file that had been left un-updated for a long time, and the Magistrate invited us into his office. He was interested in knowing what we thought of the legal system here in Kenya compared to the Canadian one. Talking to him made me realize that on paper Kenya and Canada’s legal systems are not so different. Both countries were colonies of England and thus both countries use the common law, (with the exception that in Canada Quebec uses the civil law for some matters). In fact, the laws in Kenya exist and are good. The new constitution[2] enshrined the basic rights of children. But the problem is the implementation of these good laws. One thing is to change things on paper, and another thing is to change people’s attitudes and behaviour. 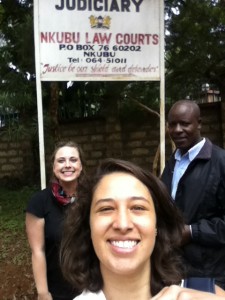 As a matter of fact, corruption runs deep within the police forces in Kenya[3]. At least six times when I have been doing fieldwork I have been in a vehicle that has been stopped by the police and driver has given out money. It happens everyday. It happens everywhere. And it’s a vicious cycle. Indeed, some of the families of girls that have been abused are so poor and so used to the corruption that they will make an arrangement with the family of the perpetrator to brush off the abuse and get in exchange some little money and some livestock. It is as if the words justice and legal system meant nothing to some people because all they have been used to is “under the table deals”. But, these are the kinds of issues that matter when you are doing human rights work, and these are the kind of issues you can only acknowledge by going out into the field, talking to people and experiencing it first hand.

Now, after 6 weeks and a half here in Kenya, it is clear to me that these issues are the reason why human rights work is about people, why the human component in any job is fundamental, why I find so fulfill and gratifying to spend my Saturdays playing with the girls of the rescue center, why meeting with police officers, Magistrates and prosecutors and listening to their queries and concerns has made me a better lawyer-in-the-making, and why these experience so far has been one of the greatest learning experience.

Lastly, and going back to why creating good relationships is important, I would like to share that in the last three weeks two girls have found justice as their perpetrator (their own respective fathers) were sentence to life in prison. Those convictions represent an incredible win in the fight against child sexual assault in Kenya. Coincidentally, both case were heard at the court I had mentioned in my previous post, where the magistrate keeps things tight and seeks expedient justice for the victims. Having the chance to get to know this Magistrate is one of those human relationships that I have found so valuable of my work here because it made me realized that what ultimately really matters in human rights work is making allies with the people that also want to make a difference. The human rights battle is not a battle you can fight alone. It is a battle society needs to fight collectively. So go out in the field and meet people and make valuable connections.