The North is as vast as it is beautiful.

I am humbled by the immensity of the Arctic and by the remarkable people who inhabit it. 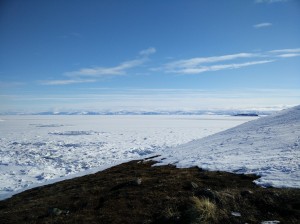 My new home is in Apex which is a small community about 5km Southeast of Iqaluit, accessible by causeway.  Luckily, my host family has allowed me to use their ATV to make my way to and from work each day.  The drive is about 15 minutes which can be quite harsh due to stinging winds. 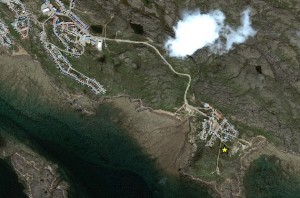 The temperature in Iqaluit has hovered at -1 since my arrival, with alternating snow and rain.  This pales in comparison to the -70 temperatures (wind-chill included) that the Nunavummiut face during the winter.  Earlier this month, I was able to participate in the sixth annual Yurt Fest which took place out on the massive expanse of ice that is Frobisher Bay.  It was my first time out on the land and I came across teams of dogs near their sleds peering at us with one eye as they slept under the bright sky.  After meeting many new people and partaking in the festivities, I sat with an Inuk hunter who told me a bit about her life and her encounters.  She had traveled down South on many occasions and was familiar with the urban life and modernity as I have come to know it living in a big city.  After telling her a bit about the nature of my work at Maliiganik, she proceeded to inform me that the Inuit do not have a word for “criminal”.  For them, the world is not cast in black/white and neither are people wholly good nor wholly evil.  I recognized that the legal paradigm I have been instructed in has minimal relevance to the old and new Inuit way of life which is built on its own set of premises. 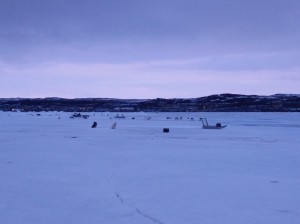 I have been troubled by this realization in my work for legal aid at Maliiganik Tukisiiniakvik.  Thus far, my research has been primarily focused in criminal defence and civil (poverty) claims.  The office environment is fantastic and I find much of the work to be very morally rewarding.  However,  I cannot help but wonder if the superimposition of Western legal values is but another form of neocolonialism within a nation which, perhaps falsely, prides itself on multiculturalism.  A few days ago, I read part of the TRC commission as part of a social media movement pioneered by my host who is also a criminal defence lawyer at Maliiganik.  I find it quite timely that I am in the territories at a time when we have begun to peel back a dark layer of Canada’s recent history, the effects of which can still be felt in this gigantic expanse.

So far during my brief stay, I have done my best to immerse myself as much as I can and to learn from those around me.  I have gone jigging for fish out on the melting ice, participated in a local “feast”, volunteered at the annual Alianait Festival, and hiked in the mountains/hills near Apex, inter alia.  Moreover, I have cooked seal, sampled raw narwhal and dried caribou, and eaten Arctic char. Lastly, I coach youth in soccer on Wednesday nights at the Arctic Winter Games Complex. 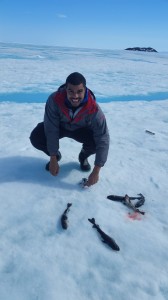 I am hesitant to exoticize my experiences further, lest I become the intrepid international intern.  My brief stay in Iqaluit has cautioned me against simple solutions in wake of a truly complex array of institutional and social relations which play out in Iqaluit and the smaller communities of Nunavut.  I am wary of merely echoing the voice of the transient population that is so apparent in the territories; the people who travel here with ulterior motives and fail to truly appreciate this place.  Luckily, I have started to build–what I hope will be–lasting bonds with the locals who are often skeptical of Southerners who are simply here in passing for a couple months or a year and then return from whence they came with fond memories.  I am aware of the profound sense of distrust of “well-intentioned” foreigners–reminiscent of the oppressive colonizer.

As such, I endeavour to remain open-minded and perceptive.

I still have much to learn and see before departing. 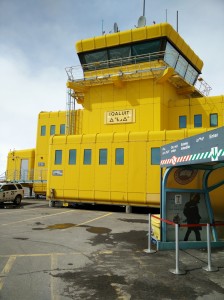