A few days ago I was visiting Kabarole District in Western Uganda and I was talking to a local man involved in projects for strengthening his community. Being a Canadian interested in development and finding myself in a new, and very different country, I asked him what the biggest challenge was with development initiatives in the area. He responded:

“In Uganda, we have a saying: ‘God gives meat to those who do not have teeth’. This means that many people are given things that they cannot use, and that’s a big problem with development initiatives because many organizations do exactly that. Organizations need to know the local community, their needs, culture, and governance structures before they come and try to help us. For there to be long-lasting success, organizations have to work with the community so that members can take ownership over the project and so that efforts are not wasted. Many organizations don’t do that.”

Since beginning my internship at the Center for Health, Human Rights and Development (CEHURD), I have witnessed the workings of an organization that does not make that mistake. I have had the opportunity of being involved in all three of CEHURD’s programs (Human Rights Documentation and Advocacy, Strategic Litigation, and Community Empowerment) and have been able to witness the importance and the effectiveness of the approach of engaging community members and providing them with the knowledge to demand for their rights. Particularly through the Community Empowerment Program, CEHURD works with local communities to identify specific health issues and work together to address them by creating knowledge and awareness.

At the beginning of June, I went with the CEHURD team to Manafwa District in Eastern Uganda and participated in implementing a project in partnership with the African Rural Development Initiative (ARDI), a Community Based Organization that works closely with CEHURD in that area. Together, our two organizations have been working to advance sexual reproductive health (SRH) in schools in certain districts of Uganda to sensitize students on issue of SRH and to help them make informed decisions about their own reproductive health. The project also involved holding stakeholder dialogues with religious and cultural leaders, the police, and community members, all of whom play essential roles in the topic of SRH.

This community project is a direct response to a study conducted by CEHURD in 2014 entitled “Criminalization of Abortion and Access to Post-Abortion Care in Uganda: Community experiences and perceptions in Manafwa District”. Uganda has one of the highest rates of maternal mortality in Eastern Africa with a rate of 438:100,000 live births. Of the over 6,000 estimated maternal deaths that occur in the country every year, about 26% (more than one quarter!) are attributed to unsafe abortions. While common in many districts in Uganda, the study conducted by CEHURD revealed that unsafe abortions are particularly prevalent in Manafwa District. A local health care centre, Bugobero Health Centre IV, reported that they received approximately 25 patients per month who needed post-abortion care (PAC), while a total of 205 abortion cases were registered by public health facilities in the district over a period of 12 months. Given the illegal nature of abortions, it is likely that these numbers do not show the whole extent of the problem, as many cases remain unreported for fear of the legal and social consequences of this criminal act.

Over the three days in the field, one of our main activities was to engage students from four schools, including Lwakhakha Primary and Secondary, Bumbo Secondary, and Kisawayi Primary, to critically think about and discuss SRH issues. During our time at each school, over 500 students were involved in debating the topic: “Should the use of contraceptives be encouraged in schools?” 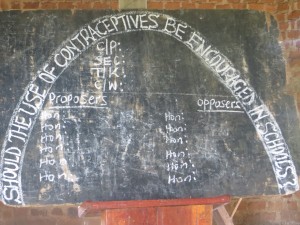 This topic was chosen in order to open dialogue between school children about contraceptive use and the high rates of unsafe abortions that occur in their district. Students between the ages of 8 and 22 were selected ahead of time to debate both sides of the argument. At the end of the formal section of the debate, the floor was opened up to other students that wanted to contribute arguments either for or against the motion.

Overall, the level of debate was very good and the students were all enthusiastic and quite comfortable talking about issues of sex, contraceptives, pregnancy and sexually transmitted illnesses. There were however many misconceptions of the use of contraceptive that were found across all 4 schools. Among the most frequent mistakes were that contraception use damages reproductive organs, causes permanent infertility, produces deformed babies with big heads or the size of small rats, leads to diseases such as hypertension, and that girls will waste the family’s little financial capital on buying these pills, Injectaplans, or condoms. 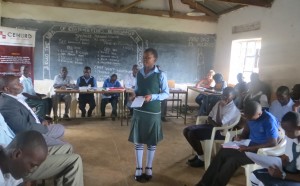 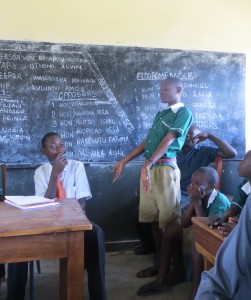 Following the debate, a community health worker, a midwife at a Health Centre III, gave the students sexual education by explaining biological basics as well as addressing some of the myths and misconceptions about contraceptive use that arose during the course of the debates. Importantly, she also informed all the students that contraception, such as pills and condoms, are actually free of charge at health centres and therefore can be obtained by anyone. She told the students of the “youth-friendly services” are available in many health centres and that students should begin to start accessing them if they are engaging in sexual activities.

The nurse also brought in the issue of unsafe, self-induced abortions, an issue that had arisen by a few of the students arguing for the use of contraception to be encouraged in schools. Many early pregnancies by young girls who are still in school can lead to the girls seeking unsafe abortions in order to remain in school or the avoid stigma by family or community members. In order to avoid these early pregnancies, it was highlighted that the two best options were abstinence and, if that is not possible, condom use.

The students remained engaged throughout the whole session. At the end of the midwife’s talk, students asked very relevant and interesting follow-up questions and, upon an informal evaluation at the end of the session, students clearly indicated that they had learnt new information about contraception use and were aware that some of their initial ideas were in fact wrong. 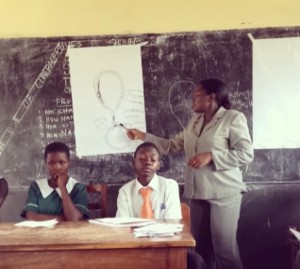 My visit to Manafwa District taught me many things and helped me reflect on some of my own conceptions of human rights and development initiatives. Firstly, I began to think deeper about what exact “the right to health means”. The right to health imposes 3 obligations on the government: the obligations to respect, protect, and fulfill. Empowering community members through these dialogues and debates is the beginning of creating an environment where individuals take ownership of their rights and begin not only to understand them, but to also be able to hold appropriate people or institutions accountable. The government always has the three obligations however, when individuals are not aware of their rights, they are not able to demand those rights. By informing individuals on their sexual reproductive health rights, the government becomes accountable for its duty to respect and protect the communities.

Secondly, I had the opportunity to experience and reflect on what it takes to begin to effect real change in a least developed country like Uganda. My personal interests have always been in development issues, particularly around health issues, in low- middle-income countries and yet this is the first time that I have had the opportunity to work with an indigenous NGO and, more specifically, to interact with the community members that many international laws and policies I’ve read or studied are supposed to help. This experience in Manafwa District with the CEHURD team has allowed me to better understand the challenges and barriers that individuals and communities face as well as their specific needs and stories. The Community Empowerment team at CEHURD engages people in a way that directly involves those affected in shaping decision and will ensure sustainable change. International laws or policies can serve as guiding principles, but no change will be effective unless the laws and policies are not based on specific community contexts and the realities on the ground.

When it comes to reducing the number of maternal deaths due to unsafe abortions, the road begins with educating children on the facts of SRH and then including all key stakeholders in the discussion. Sustainable and effective change starts by addressing specific community needs and involving all those in the community in the change process.