This summer, the One Earth Future Foundation (OEF) and the Institute for Economics and Peace co-hosted a very exciting event in Denver: The Ninth Annual Global Peace Index Launch. Academics, activists, politicians, business leaders and religious leaders were invited to a discussion at the Boettcher Mansion to explore recent trends in militarization, safety and security, and ongoing conflict. Specifically, the panelists were tasked with answering some very tough questions: Is the world becoming more peaceful? What are the main factors that build peace? How can we prevent violence?

The questions were asked in the context of the new findings in the 2015 Global Peace Index (GPI), which ranks 162 states according to their level of peacefulness using 23 indicators.[1] This year Iceland was ranked as the most peaceful country, while Syria was ranked the least peaceful. Canada placed 7th, while the United States placed 94th. 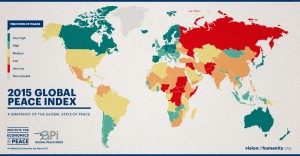 The GPI’s definition of peace is quite broad: peace is not the opposite of war, but the absence of violence and fear of violence. This “Negative Peace” is measured by examining on-going domestic and internal conflict, societal safety and security and militarization. Additionally, this year the GPI has introduced a new element of analysis: “Positive Peace”. Aubrey Fox, the Executive Director of the Institute for Economics and Peace, explains that Positive Peace is measured by examining “…the attitudes, institutions and structures [characteristic] of more peaceful nations”.[2] Some of the factors of Positive Peace are a well-functioning government, low levels of corruption, acceptance of the rights of others and equitable distribution of resources, to name a few. In other words, the GPI is no longer simply looking at what causes war and violence but what causes peace and stability.

The GPI includes a report about the trends and conclusions that can be drawn from the ranking. The bad news is that according to the GPI, over the past 8 years the world has become slightly less peaceful. Notably, terrorism has increased “and shows no sign of abating”.[3] Over the past 8 years deaths caused by terrorism have more than doubled. Also, an estimated 50 million people are refugees or internally displaced, which is “the highest number since the end of the Second World War”.[4] The GPI calculated that the Global Economic Impact of violence is US$14.3 trillion, which is equivalent to 13.4% of the World GDP.

As for the good news, expanding the dataset and looking at a longer period of time, the panelists at the GPI launch feel that the world is still on average more peaceful, notwithstanding the increase of violence in recent years. Notably, interstate conflicts are consistently decreasing and homicides have gone down in developed countries. Andrew Mack, Director of the Human Security Report, told the conference that there has been a decline in low-level conflicts, which he pointed out, means there will be fewer high-intensity conflicts down the road.[5] Mack is cautiously optimistic for peace trends in the future.

Looking at the good and the bad, looking at the short-term and long-term trends highlights the bottom line: the world has peace inequality. The decrease the GPI finds in peace over the last 8 years is not evenly spread: 86 countries deteriorated, while 76 improved. Countries with low level of peace are more volatile, whereas countries with level levels of peace are more likely to remain peaceful. Europe has reached record levels of peace, while the Middle East and North Africa has “…experienced more upheaval and uncertainty than any other region.”[6] Even sources of instability that are universal do not effect countries evenly. For instance, although, terrorism has been increasing in recent years, 82% of terrorism deaths have occurred in just five countries: Iraq, Afghanistan, Pakistan, Nigeria and Syria. 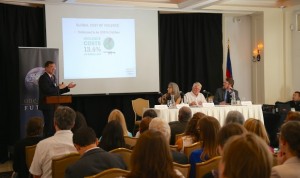 How can we transform peace inequality to peace equality? According to Fox, the answer lies with the factors of positive peace:

…I think for the global community it’s about finding ways to invest in these underlying factors. The three domains that we find the most important are sound business environment, good governance and low levels of corruption. […N]one of those are easy [to achieve] but unlocking those is really the key. [7]