My internship at the Inter-American Court of Human Rights (IACtHR) in San José, Costa Rica, began on May 24, 2016. For years I have admired the work that the Court does and, naturally, was ecstatic to be accepted in one of the three groups of visiting professionals and interns that support the Secretariat year-round at the Court. 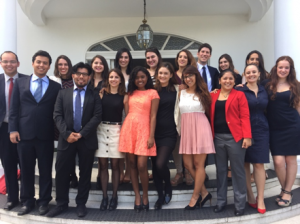 The visiting professionals and interns for the Summer of 2016.

My work at the Court consists in doing investigations on human rights issues, writing reports and generally supporting the senior and junior attorneys that I work for in the Secretariat. From June 20th to June 24th, the Court held its 54th Extraordinary Session and I was able to sit in on Andrade Salmón vs. Bolivia, a case alleging the mismanagement of public financial resources and the illegal and arbitrary detention of a mayor in La Paz, and Vereda La Esperanza vs. Colombia, a case alleging the forced disappearance of 14 persons in 1996 in El Carmen de Viboral, Antioquia, by paramilitary groups with alleged support and acquiescence of state agents.

My internship thus far at the Court has been very rewarding. Despite the enthusiasm I have felt about my personal experience, I want to explain the bigger picture—how the visiting professionals and interns fit into the larger scheme of the inter-American system for the protection of human rights. I want to respond to questions such as, how does the Inter-American system of human rights work, or, how does one bring a complaint before the Court?

To start at the beginning, the IACtHR, an organ of the Organization of American States (OAS), was created by the American Convention on Human Rights (ACHR) in 1969 and officially commenced operations in 1979 (after the ACHR entered into force in 1978). The Court celebrates four ordinary sessions per year, plus the extraordinary sessions when convoked by the president or the majority of the judges. The Court is composed of seven judges, all members of the OAS (Article 52 ACHR) and a Secretariat, whose mandate is to assist the judges in their functions. The Secretariat is composed of fewer than 30 attorneys and is supported by the indispensable work of the visiting professionals and interns.

To bring a case to the Court, the potential victim must lodge a complaint with the Commission (which was founded in 1959 and began its first of session in 1960). The Commission is composed of 7 commissioners, including a president and vice-president (their functions are defined by Article 41 ACHR). The Commission, unlike the Court, can examine potential violations of the American Declaration of the Rights and Duties of Man by all member states of the OAS, regardless if they are state parties to the ACHR. The Commission has received thousands of petitions, with a total of petitions 1758 received in 2014 and 2164 petitions received in 2015.[1] Around ninety percent of the petitions are rejected (see requirements in article 28 Rules of Procedure of the Inter-American Commission on Human Rights).[2]

The Court will subsequently hold oral proceedings, in which the Commission, the representatives of the alleged victims and the state appear, as well as witnesses and declarants (Article 45 et seq. Rules of Procedure of the IACtHR). There are three parties to the proceedings at the Court: the Commission (Article 57 ACHR), the alleged victim and the state. During the hearing, the Tribunal will hear allegations and observations over preliminary exceptions, merits and reparations.

The decision of the Court is final, although the parties can request an interpretation of the ruling if there is a disagreement as to its meaning or scope (Article 67 ACHR).

When the Tribunal finds that the state has violated a right guaranteed in the inter-American human rights treaties, the Court orders reparations, both patrimonial and extra-patrimonial, for a restitutio in integrum. The Court will monitor the compliance with the judgments and other decisions at the Court through the submission of reports by the state. The Court can even convene hearings to monitor state compliance (Article 65 ACHR, Article 69 Rules of Procedure of the IACtHR).

Finally, the Court can also issue advisory opinions regarding the interpretation of the ACHR or of other treaties concerning the protection of human rights in the American states (Article 64 ACHR, Article 73 Rules of Procedure of the IACtHR).

The IACtHR faces many challenges and criticisms, such as the enforceability of its rulings, financial and operational constraints, and the non-universality of its instruments. Member states have entirely failed to implement parts of the Court’s rulings in 30% of the cases (statistics from prior to 2008) and compliance with the Court’s rulings through the modification of domestic legislation has been achieved only in 20% of cases (see Inter-American Human Rights Network).[3] Funding from OAS member states is wholly insufficient, leading to mass layoffs at the Commission.[4] A total of 9 out of 34 inter-American states have not ratified the convention—among those are the United States and Canada—and two others have denounced their ratification. Finally, the range of human rights covered are not just “traditional” human rights, designed to address violations such as those perpetrated by military dictatorships, but also include rights touching on issues dealing with indigenous, LGBTI and abortion, which often raises opposition from state and religious interest groups, further placing barriers and making obstacles for the functioning of this important human rights institution.

I hope that, in not too technical of terms, this has answered how the Inter-American system of human rights works and how the interns fit into the bigger picture. On a final note, however, I would like to say that the most valuable part of my experience, has been the variety of people, places and perspectives that I have encountered at the Court—the personal side of my experience. The friends I have made have led to enriching conversations on Latin American (and U.S.) politics and human rights issues. There is a wide range of countries (both Latin American and European) represented by the interns and visiting professionals at the Court, which has created an inspiring and convivial intellectual environment. On the weekends, Costa Rica offers a diverse selection of beaches and volcanoes to discover outside of San José, out of which I have most admired visiting the northwestern province of Guanacaste—the driest province in Costa Rica, known for its surf beaches and guanacaste trees, notorious for their elephant-ear shaped seedpods. 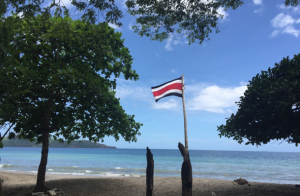 [4] “Severe Financial Crisis of the IACHR Leads to Suspension of Hearings and Imminent Layoff of Nearly Half its Staff”, OAS Press Release, May 23, 2016.