A few weeks ago a friend took me out on the ice. There were three of us with just one snowmobile, and so for the first leg of the journey I rode in a ᖃᒧᑏᒃ (qamutik) attached by thick steel hitch to the back of the Ski-Doo. Though I’d seen qamutiks around Iqaluit, resting next to houses or snow-flecked on the back of a Bombardier or Arctic Fox, it was my first chance to ride the famous sledge. 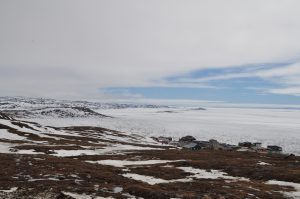 The qamutik is one of those traditional designs that has maintained its relevance over time and has continued to outperform newer technologies. Explorers from Britain and the United States, who thumbed their noses at the Inuit design at the start of their expeditions, saw sleds imported from Europe reduced to splinters naught but a few miles into journeys. And locally, one friend told me that while many Inuit have replaced dog teams with snowmobiles, the qamutik design has endured, with only the smallest of changes in material.

The first part of our trip crosses the rough ice next to the shore—a field of towering chunks and gnarled fissures, cracked and compacted by a winter of shifting currents and reaching sea-ice. The qamutik heaves. Bounces. I’m tossed and jostled like an apple forgotten in the flatbed of a pickup on a country road. The wood squeaks and flexes but holds fast and before too long we are out on the smooth ice. 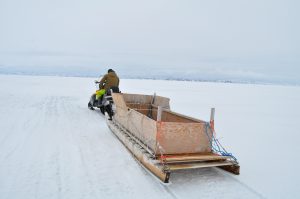 The genius of the qamutik design lies in the knots that bind the cross-pieces (or napooks) to the runners. Where the repeated thud of wood on hard ice is enough to wriggle ever the most resolute of nails free from their place, the knots and cord give the design flexibility, allowing it to maintain its integrity as it pounds across the rough terrain.

I’m banged and bruised but the ride is much more fluid on the open ice. The snow-mobile weaves around patches of blue ice and the qamutik bends along behind like a slinky. We stop and look at the mountains on the far side of Frobisher Bay. A small flock of geese flaps over the ice. In a landscape without trees to blow through, I find the wind sounds lower, throatier.

Beyond the functional importance of the qamutik, the traditional sledge-runner is also represented in art and architecture, carvings and design. At the busiest intersection in town, the four corners, there is a large red building designed to look like a qamutik. At galleries around Iqaluit, I’ve seen miniature qamutik carved from caribou antler or serpentine. And, in one of the courtrooms, the barrier (or bar) that separates the gallery from the bench and counsel tables, is made to look like two long qamutiks. 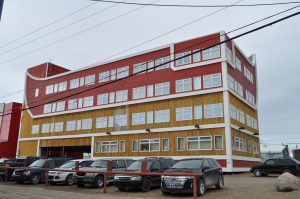 At the far end of the Bay I get out of the qamutik. I hear creaking beneath my feet. The ice, I’m told, will be solid for several weeks. In the interim, puddles form and freeze upon its surface that you can still fall through—not enough to reach the swift tidal current below but sufficient to ruin a good outing. The qamutik floats like a barge on this frozen sea and I return to its safe confines.

As we turn and head back towards town, I look out on islands in Frobisher Bay. They seem to peek through the ice like mountaintops through clouds. I think about the qamutiks represented in the courthouse, wondering how they are meant to relate to justice in the North. 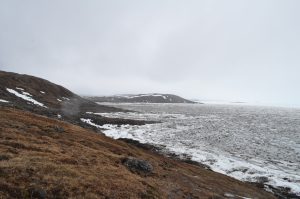 Are they meant to reflect the system as it is? Or, are they presented as aspiration, an allegory of what the system might become? Are efforts like the Gladue reports that are considered when sentencing offenders of aboriginal background the flexible knots in an otherwise harsh carriage of justice as it bumps and crashes across a socio-cultural landscape? I reflect on judicial processes adapted for the context, from decentralization efforts to official Inuktitut and Inuinnaqtun language requirements, wondering if they will endure. I think about certain imported features of southern justice and if they are as doomed to fail in this context, like European explorers’ sleds dashed upon the ice.

I hop out of the qamutik feeling privileged to have had the ride. I’ll look at them differently as I walk through town. Hopefully, another chance to ride in a qamutik will glide past again.