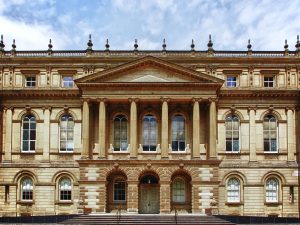 “Small world,” remarked another Canadian Civil Liberties Association (CCLA) summer student sitting next to me. We were looking around the Ontario Divisional courtroom at Osgoode Hall in Toronto and we were both waving at or pointing out friends and acquaintances dotted across the wooden benches.

“Ah, there’s my friend Ella, I guess she’s working at the firm that’s doing pro bono for another intervenor.”

“Oh, there’s my classmate Sean, I forgot that he’s at the Attorney General this summer.”

“Woh, I think that woman pleading right now is a cousin of my good friend Dave!”

We’d taken the day out of the CCLA office to sit in on closing arguments for Christian Medical and Dental Society (CMDS) v College of Physicians and Surgeons (CPSO), a constitutional challenge to policies requiring that doctors give “effective referrals” when the doctors are themselves religiously or morally opposed to certain procedures—procedures like abortion and doctor-assisted dying.

CMDS’ counsel was arguing that with the new requirement that they give referrals, CPSO is making medical professionals decide between their religious beliefs and their professional role, and hence infringing their section 2(a) freedom of religion Charter rights. CPSO, on the other hand, asserted that the rules around effective referrals adequately balance the competing rights and freedoms with the statutory objective, maintaining access to healthcare services, while only minimally impairing certain physicians’ freedoms.

Fascinating though the case may have been (and may continue to be once the decision is rendered and potentially appealed), what I initially took away from the courtroom was an eerie feeling of cultural homogeneity. In part by virtue of my attendance at a central-Canadian law school, I was acquainted with a sizeable percentage of the people in the room before I walked in the door. Drawn largely from an urban, white, progressive background, a set of like-minded folks appeared to fill the benches.

But what dawned on me as the day unfolded was that not everyone in the room was cut from the same cloth. After speaking over the lunchtime adjournment to a couple of students and young lawyers whom I did not recognize, I realized the intervenors and partisan spectators on the other side of the argument brought with them noticeably more religious and conservative worldviews.

It became clear that the demographics were not homogenous after all, but rather reminiscent of a kind of bifurcation that I’d observed while working on Parliament Hill in Ottawa. There, my colleagues in the Parliamentary Internship Programme were generally progressive and more often than not believers in the positive potential of state power. But while we would mostly socialize amongst ourselves on the Hill, the program placed us in both opposition and government offices, at a time when the Harper Conservatives ran the show. I realized through that experience that a steady stream of young conservatives churned through those offices as well, many drawn from evangelical backgrounds and many of them more fiery and committed to politics than I’d previously grasped. 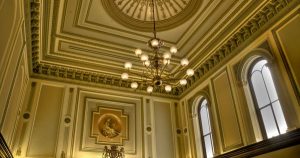 Like on the Hill, the population in the courtroom was lined up mostly along partisan lines, even sitting on different sides of the room. These proceedings could be understood, I realized, as politics in another arena. Charter rights would take the place of policy, judges opinions the place of MP votes—but the crowds would still root for their side and one would temporarily prevail over the other.

What’s more, at least in one framing of the dispute, each side had its own bit of the Charter to root for; the CMDS was rallying behind the importance of the section 2(a) freedom of religion while the CPSO and many of its allies were arguing that section 1 should carry the day, saving any apparent infringing policies in the process.

“Nobody here is doubting the sincerity of your clients’ beliefs,” said one judge to the CMDS counsel in the dying moments of the hearing. The judge was staring the counsel down as if to act out the drama of the Charter, as if to say: yes, your clients have this right but whether it prevails depends upon what we find to be necessary for the functioning of a free and democratic society.

In that courtroom and mediated by the language of law, the perspectives of people like me hopefully came into dialogue with those of people from a markedly different background and set of convictions. In that sense, it would be all of our arguments and sentiments that would constitute the real small world of this case—the microcosm of opinion, arrayed around this particular dispute and working itself out in the reasoning of the judges, striving in their way to do justice to each and to all.

Opinions expressed are my own and do not necessarily reflect the view of the CCLA.