Hi everyone,
In my last post, I didn’t say much about where I was actually interning this summer. So here is some information and thoughts about Morocco’s National Human Rights Council (CNDH)!

The CNDH was founded in 2011 by the King of Morocco, Mohammed VI, in the context of a significant wave of protests (known as the February 20th Movement) that took place in Morocco, inspired by the Arab Spring. Its mission is to promote and protect human rights in the country. It does so by conducting research, advising the government, cooperating with national and international human rights organisations, doing advocacy work, conducting awareness-raising activities, promoting a culture of human rights in the country and by responding to allegations of human rights violations submitted by citizens. The CNDH receives thousands of such complaints a year, about a number of different types of violations- allegations of mistreatment in detention centres and violations of the right to peaceful protest are just a few examples. The Council does not have the power to enforce human rights laws when an allegation is proven- its role is to ensure better access to justice for victims and monitor whether justice is being served.

During my internship, I noticed very little coordination and cooperation between the different departments of the CNDH. This was unfortunate for me, as I would have liked to have learned more about the institution’s procedures regarding complaints of human rights violations, which are handled by the Department of Protection. Working in the Department of Cooperation and International Relations, I felt very removed from the human rights situation ‘on the ground’ in Morocco, and had little sense of what the CNDH did to protect and promote human on a practical level. Nonetheless, this in itself was an important learning experience for me- it made me realize that ultimately, I think I prefer working in smaller organisations where I can have a more direct relationship with people affected by human rights issues. 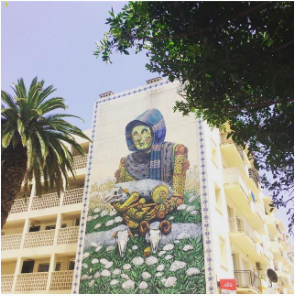 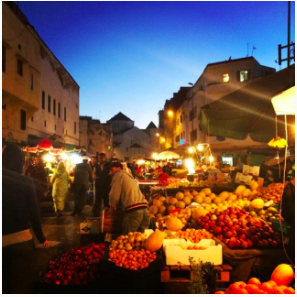 Street markets are very common, and active late into the night. 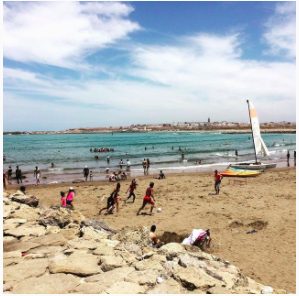