“How inappropriate to call this planet Earth when it is clearly Ocean.” (Arthur Clarke)

Recent birthday celebrations for Québec, Canada, the US and France have made me reflect on borders and what they mean in both our imaginations and our laws. Whether marked by shoreline, waterway, fence or wall, national boundaries have a profound impact on our freedom of movement and our sense of identity.

These national holidays have induced a slight identity conflict. Though I’m thankful for Canada, how do I celebrate July 1st when the date represents 150 years of the imposition of colonial borders and a colonial state? How do I celebrate 150 years of borders that still turn away too many refugees? How am I so lucky to have a visa to work in the USA this summer, when so many others are turned away? Can I celebrate St Jean Baptiste when I’m not really québecoise, though it’s been my home for almost 7 years? And how on earth did I end up celebrating Bastille Day for the first time ever from a parking lot in downtown Denver?!

Amidst my personal reflections on borders and belonging, thoughts from my internship work on maritime governance began to seep into the mix. In a sense, oceans and waterways are what connect our nations, in contrast to the borders that divide. The root word of ‘territory’ means ‘land’ in Latin (like « terre » en français), and the concept of national territory is rooted to that of land.

Borders, territorial sovereignty, and national jurisdiction do not work as well on sea as they do on land, despite the efforts of the UN Convention on the Law of the Sea to draw various kinds of boundary lines on the world’s waters. Sparse state control and scarce state responsibility can mean both opportunity and danger for those who work and travel on the open seas.

In some ways, the sea means opportunity. The lack of state control on the world’s oceans provides the opportunity for migrants to escape desperate situations in their home countries and have the chance at claiming asylum in a new land. Oceans also provide employment to many, with fisheries and aquaculture assuring the livelihood of about 10-12 percent of the world’s population.

In other ways, the sea means danger. A lack of state control opens the door wide for human rights abuses: from fishermen on boats where labour laws are neither respected nor enforced, to a gruesome murder captured on cellphone video that still remains unprosecuted, to a coast guard shooting with impunity at migrants they were supposed to rescue, the ocean can be a dangerous place.

On the high seas, state accountability often fades into the horizon along with the shore. It is not uncommon to have a ship that is (for example) owned in China, flagged by the Bahamas, licenced to fish by the Seychelles, and crewed by a mixture of Filipinos, Indonesians and Sri Lankans. It becomes easy for states to avoid accountability when they can always point the finger at someone else, and countries less likely to exercise oversight are often the ones chosen as flag states. This makes human security at sea a trans-jurisdictional problem, in a system where responsibility is primarily state-based. Seafarers, fishermen, and migrants—usually from non-western countries—are the ones who slip through the cracks.

My slight feeling of displacement and identity disjunction around mid-summer national holidays pales in comparison to the ways in which some people’s lives move with the open seas. Researching maritime law from landlocked Colorado—just about as far as you could get from the sea in North America—I feel a sensory disconnect from those to whom these laws apply. I know the black texts of law written on the whiteness of a page, but I don’t know the colour of the stories that are woven around them. 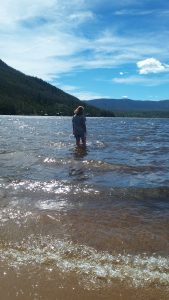 The closest I can get is the blue of this Colorado mountain lake, although it is so far removed from the ocean. Eventually, these waters flow down through Mexico and the western US to the Pacific, where they’re joined by waters from my homeland, British Columbia, and perhaps eventually even from my adopted land, Québec. Once the fresh water has intermingled with the salt, who can tell anyway? Unlike us humans, the waters don’t get territorial.

The blue space on the map provides a beautiful metaphor for our interconnectedness, as Lights sings so eloquently:

I cannot fully make sense of the ways in which our world is both globally intertwined and sharply divided, and I cannot single-handedly address all the injustice this creates. But I want to remember that—in some small way—my work here in Colorado is connected to all of it.

(And, hey McGill—when I get back to school in the fall, I swear I’ll never laugh at the word “transsystemic” ever again….except maybe at Skit Nite…)