It’s a bumpy ride from Rankin to Chesterfield Inlet. A short 15 minute hop and the plane flies low. As we take off, the pilot announces that the caribou herd is off the right side. I’m sat on the left and I crane my neck. I reach for my seatbelt but as the plane pitches and I think better of it. They’re down there all right. A herd I’m told is 100,000 strong. But the hoof beats are drowned by the turbo-prop engines and my vision’s blocked by the passengers across the aisle. Over the week this story repeats itself. Rumours and sightings. But as mighty as the migration is alleged to be, I won’t manage to see the caribou. 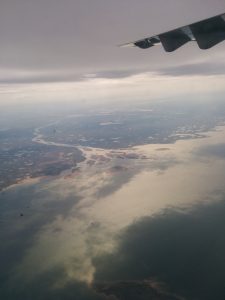 I’m travelling to Baker Lake in the Kivalliq Region of Nunavut on the circuit court. It’s the only inland community in the Territory and sits close to the mouth of the Thelon River. Baker is about as close as you can get to the geographic centre of Canada.

For those in Montreal and Toronto who might describe “going north” to Sainte-Agathe or Huntsville, Baker Lake, at the longitudinal midpoint of the country, underscores this thinnest veneer of northern space that most Canadians occupy.

Like many communities in Nunavut, Baker Lake does not have a sitting judge or permanent courthouse. While some matters can be dealt with through teleconferences, others are served through a travelling ‘circuit court.’ Periodically, the crown and defence lawyers, court workers, clerks, translators and judge fly into communities to hold first appearances, preliminary hearings, trials or sentencings. Sometimes they even bring along a summer student, as is the case this week. It’s a migratory court that travels across the North from community to community and back again. 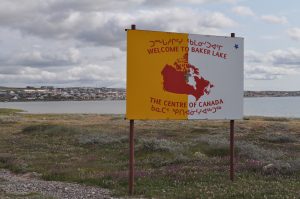 The days before the circuit are spent interviewing clients and meeting with the Crown. The judge and court party have not yet arrived and there is much work to prepare beforehand. Some of the individuals will be in jail by the end of the week. Others will have their matters dismissed.

Defence and crown sit to discuss those matters where a joint position may be possible and determine those issues where agreement will not be possible. Nerves and anticipation of what is to come. 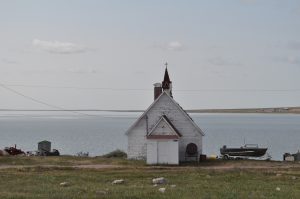 In a break between meetings and research I visit the Jessie Oonark centre. The centre holds a printshop, jeweller’s studio, space for seamstresses and equipment for silk-screening.

I watch one seamstress repairing a hole in a high vis jacket. “We have an exclusive contract with the Meadowbank Mine and repair their clothing” says the gallery steward. Elsewhere, an elder is at a work station making earrings. They are shaped as Kamiks (traditional boots) and made from caribou antler. It is fine, detailed work. Her name is Martha Noah, one of Baker Lake’s accomplished artists and a collaborator of the renowned Simon Tookoome.

When the owners learn that we are in town with the circuit court they remember past court sessions, those rulings they’ve felt unfair or viewed as ill-suited for the community. Stories, nostalgia and the reservations for circuits past. 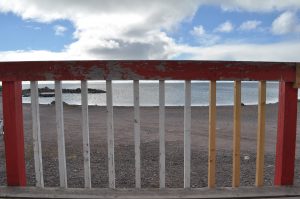 Without permanent structure, some circuit courts are held in school gymnasiums or community halls. The Baker circuit takes place in the conference room of a local lodge. As the court arrives the first day, the owner of the lodge, a man from the Shetland Islands brought to Northern Canada decades ago to work for the Hudson Bay Company, hangs flags behind the judge’s chair. A Canadian flag on one side of the judge. A Nunavut flag on the other. A room that was silent as a tundra field prepares for the rumble of matters to come. 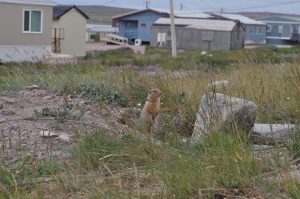 The first morning of court is fast and busy. Lawyers and the court are trying to clear the easier matters from the docket early and push more complicated issues to latter times. Things get adjourned to the next day or the next circuit court dates in October or December. The room is full and the tempo of proceedings is high. The court workers scramble to track down those accused persons or witnesses who should be in court but have not yet appeared. The hall reverberates with the energy of the court, finally arrived.

Over the next afternoon and day, the court takes over that space. Grazing on legal matters as if it had always resided there. At times it feels like it will always be there. But, gradually it thins as cases are concluded and cleared from the docket. 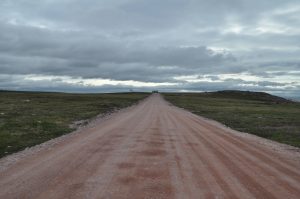 By the morning of the third day only the stragglers remain. A few lingering matters cut off from the herd of issues before the court on previous days. Crippled cases impaired by missing witnesses or accused who did not show up.  Some of these may join the other cases on future circuits, others never make it past this court.

And then, just as suddenly as it arrived, the circuit court concludes. Those finished matters settling like trampled earth.

As the plane takes to the sky I look again for the caribou herd. From Baker to Chesterfield and onwards to Rankin Inlet, I cast my eyes over the landscape for signs of their passing. But the migration has past, gone with only the faintest of traces that it was ever there. 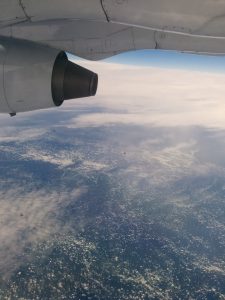