Hanging unassumingly on a wall in the hallway that divides the Research Department from several other departments at One Earth Future Foundation (OEF) is a framed version of OEF’s Institutional Logic Framework: a manifesto followed by a sort of “ten commandments” listing the organization’s core values. This mundane framed text is sandwiched between walls that are adorned with large colourful emotionally provoking photographs taken across several countries in sub-Saharan Africa – quite the juxtaposition. While OEF staff seem to pay little attention to this moral code passed down to them by the Board of Directors; the upper management, on the other hand, seem to taut these phrases in an almost cult-like fashion at every staff meeting. One of these “commandments” – my personal favourite – is: “we are relentlessly empirical”. OEF clearly has a penchant for hard data and quantitative research methodology, which is why I was surprised to walk into a development talk one day at the office led by a PhD graduate who has decided to venture outside the academic lines by pursuing science fiction.

The project that was being presented, led by Dr. Andrew Merrie, is called Radical Ocean Futures. Using a method called “science fiction prototyping”, Merrie wrote a compilation of four science fiction stories to depict four different future scenarios for the world’s oceans, integrating some predictions loosely based on scientific research on ocean health. Two of the scenarios were dystopian. In one, ocean life has died off and humanity with it, leaving behind a sole surviving fisherman. In the other, a complete industrialization of the oceans has taken place. The last two scenarios are more utopian: humanity survives sea level rise by living in underwater cities, and the most favorable scenario is that in which humanity succeeds at a sustainable ocean future, featuring robots responsible for cleaning and upkeep of ocean health. What’s more, is that Merrie also commissioned a high-profile concept artist, Simon Stålenhag, to create incredible digital artworks to represent each sci-fi scenario. 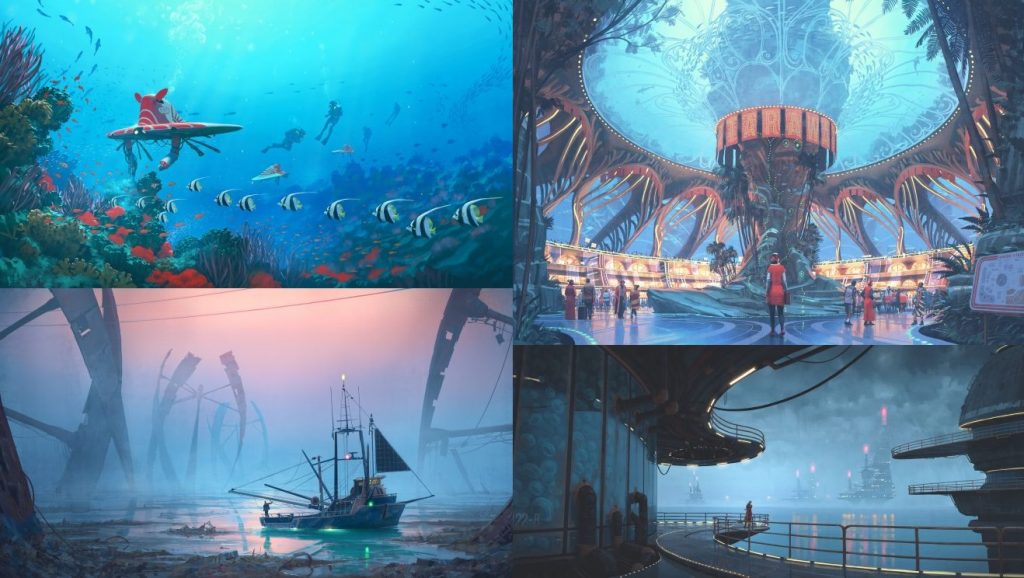 While I found all of this engaging and entertaining from an artistic point of view, what really struck me was the audience that Merrie was able to target outside of sci-fi nerds. News outlets picked up the story immediately. Most impressively, Merrie was recently invited to present this work at the United Nations Ocean Conference, with Stålenhag’s artwork displayed throughout the event. Academics from the environmental sciences have been warning us about the grave realities of climate change effects on the oceans for decades, but apparently science fiction and art were the channels that could get policymakers to tune in.

This got me thinking about the word “impact”: what does it mean and how do we measure it? In a world that is increasingly data-driven, OEF is feeling that thirst for empiricism. While the Radical Oceans project is only loosely based on actual empirical information, OEF was drawn by the perceived “impact” that it was having on their stakeholders of interest. OEF has been undergoing some major changes to their organizational structure and mandate, and a major part of this change will be to solidify a way to measure the organization’s social impact.

Coming from an academic background, the word “impact” and its measurement has always meant something very specific to me. A scientist’s “impact” is measured by a very precise formula that takes into account the number of publications that one has and the number of citations that each of those publications has accumulated. This essentially measures how influential one’s work has been on the scientific community, but not necessarily beyond those academic boarders.

My connotation of the word “impact” has really started to evolve. OEF is a multifaceted NGO that aims not only to have others cite its research and policy reports but to actively facilitate peaceful conflict resolution in fragile states. Impact in this realm is really hard to measure. However, OEF is also “relentlessly empirical” and it is difficult to pride themselves in this regard without any tangible measure of their impact on peace.

Peace is not only difficult to measure, but even to define. At staff meetings, conversations constantly revolve around concepts of “negative” versus “positive” peace and which of these OEF should concern themselves with. Negative peace is the absence of violence and war. This is relatively simple to measure, the so called “body bag count” will do. The Global Peace Index (GPI) is a sophisticated attempt by the Institute for Economics and Peace to measure such negative peace. The GPI gives a peacefulness score for every country based on several factors including: numbers of internal and international violent conflicts that a country is involved in, levels of violent crime, political instability, as well as military expenditure. The GPI is updated on an annual basis so that progress over time can be assessed. Of course, even measuring such negative peace statistics accurately, as the GPI tries to do, is just the first step in figuring out whether a small organization like OEF has any causal role in the measured progress towards peace.

Positive peace on the other hand, deals with structural violence, issues such as: poverty, discrimination, inequality and other social injustices. Negative peace is reactive, while positive peace is proactive. While even measures of negative peace can be highly contentious, positive peace is substantially more difficult to define and measure. Nevertheless, the Positive Peace Index tries to do just that by considering the effectiveness of government institutions, levels of corruption, freedom of information, and so forth.

Although such complex information is aggregated into numbers, the data tells a rich story much like those sci-fi scenarios. These data come with their own artistic depictions, albeit less awe-inspiring. The picture below shows that the PPI has been improving on average across countries for the past decade, with about three quarters of all countries showing an improvement in positive peace. These data seem to point towards the possibility of a more utopian future scenario. Quantifying peace in such a manner has always been politically controversial, especially when dealing with governments of countries who score low on these “Western” standards of peace. This is a legitimate criticism given how many facets of life an index such as the PPI will inevitably omit. 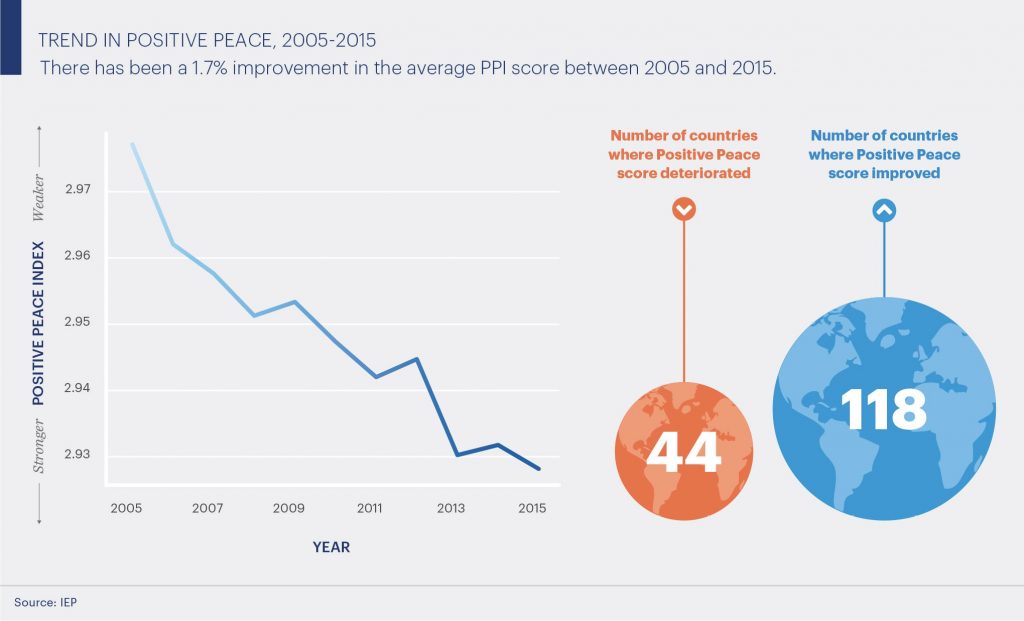 Given that peace is such an elusive concept, is it futile to attempt to measure it and the social impact of NGOs like OEF? As Steve Killelea, founder of the Institute for Economics and Peace, has said: “If you don’t measure peace, how can you understand it?“. Thinking back to science fiction prototyping in the context of the future of peacebuilding, I can imagine a dystopian scenario in which we have given up hope on measuring peace and the world has spiraled into perpetual violent conflict. On the utopian end of the spectrum, a meaningful way of measuring social impact and peace has become a reality. In this future, we can even diagnose early signs of political conflict and initiate the right preventive measures – a “positive peace” approach. To get to this utopia, we need an empirical and critical approach that challenges the meaning of impact, peace, and a deep understanding of the data that shed light on these issues. And maybe a little art can help too.