Here are some of the things that were said to me in Canada when I told people I would be spending the summer in Uganda:

“What’d you do to piss your dad off?” – My father’s (very loud and rather obnoxious) acquaintance, whom I met in the Montreal airport on my way to Uganda

“Is it for a punishment?” – My Cameroonian Uber driver in downtown Montreal

“If you can’t afford to fund the difference on your own, maybe you should get a real job in the summer instead of doing an internship in Africa.” – McGill financial advisor

The first thing that I’ll say is that the general Canadian public’s perception of East Africa, and Uganda in particular, seems to me a little twisted. It’s true that Uganda is one of the least developed countries in the world. There is poverty. It is hot outside most of the time. Police officers regularly walk around carrying machine guns. Most living compounds are surrounded by high walls and barbed wire. That being said, there is not crime, violence, and savagery to be found around every corner like some of my friends and family were concerned there would be. Uganda is not a dry and deathly desert land; Uganda is vibrant, lush, and beautiful. 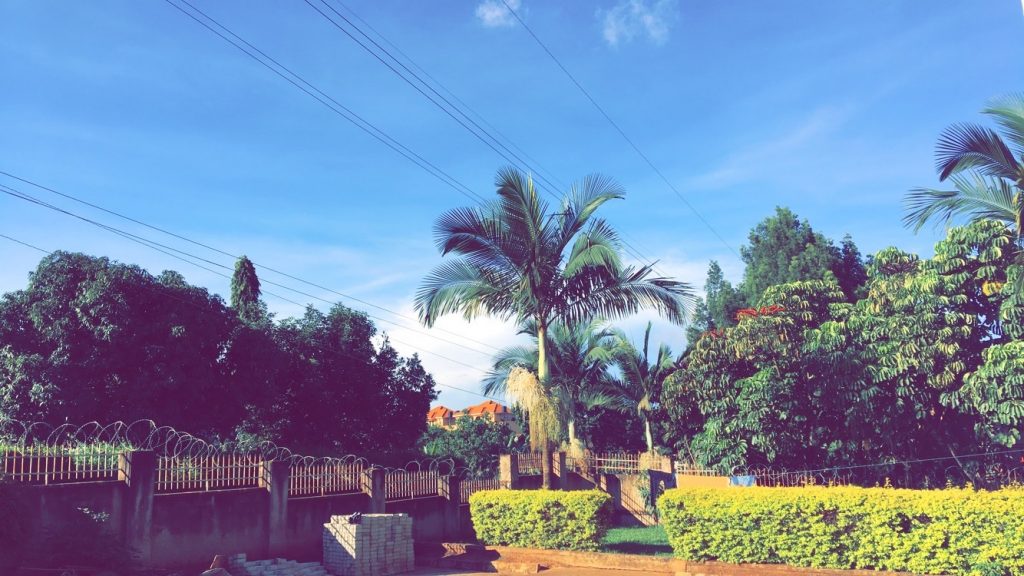 I have also noticed some western misconceptions with regards to East Africans themselves, in that I get the sense that some people assume laziness on their part. To be clear, very few Ugandans sit around pouting, complaining about living in poverty, and waiting for some wealthy person from some wealthy country to come and dump money into their laps. Everybody is doing something pretty much all the time. I always tell people that there exists a strong sense of vitality in Uganda that I have never quite felt before in any other place that I’ve visited. In fact, Uganda was recently named the most entrepreneurial country in the world. From what I have felt and observed, it is a sense of gratitude, pride, and resilience that fuels this spirit.

I worry that the negative stereotypes about danger and disease in East Africa keep people from visiting, even just for purposes of tourism. Uganda has a lot to see. Among others, I visited Jinja (the town on the source of the Nile), Sipi Falls, Murchison Falls waterfall, and went on a safari in Murchison Falls National Park.

Everybody expected me to find myself in serious culture shock upon arriving in Uganda. That didn’t happen. This might have been because I had had a few long, in-depth conversations with two expats living in Kampala before leaving Canada. It may have been because I had prepared myself to expect the unexpected. For whatever reason, I arrived in East Africa, took in the warm, sweet air that filled my senses the moment I stepped off the plane, and hit the ground running. Kampala felt like home after only a few days.

This is not to say that there does not exist a multitude of significant dissimilarities between Canada and Uganda. There are certainly many cultural and ideological differences between Canada and Uganda that make being a young, white female more difficult in the latter country. I grew used to being incessantly catcalled on a daily basis on my ten-minute walk home from work. I grew used to having locals shout “Muzungu!” at me in their attempts to get my attention to buy their products (actually, sometimes, they didn’t even want to sell me anything – they just wanted the satisfaction of gaining my attention). I also quickly became used to walking around the city hyperaware of the fact that almost everybody assumed I was in possession of deep pockets filled with American dollars. I even learned the hard way not to travel alone after dark. However, just like Uganda’s shoddy internet and temperamental electricity, all of this just became a part of the experience – and because I loved the experience so deeply, I learned to love the bad with the good. 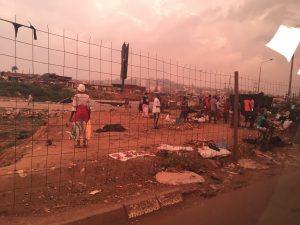 It was the reverse culture shock that hit me the hardest.

Coming home was not easy. My departure from the full and exciting new life that had so quickly materialized before my eyes throughout my three months in Kampala was cushioned slightly by travels to Kigali, Rwanda with my close friend and IHRIP intern, Julia, as well as a four-day stopover in London, England. Nonetheless, I arrived at home in Montreal, spent a few hours with my family, and proceeded to sleep for seventeen hours straight. I think that, combined with the intense jetlag through which I had put my body, this was my subconscious way of avoiding the feelings that I knew were creeping in ever too quickly as I tried to reintegrate into a society and a life that I now felt so far away from.

It wasn’t just that I missed the beautiful friends I had made over there, or the restaurants I had been to so many times that the waiters knew me by name and even brought me a cake with the words “We are going to miss you” written in chocolate on my last night in Kampala. That was undoubtedly a part of it; but there was something more. 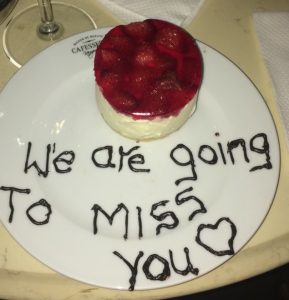 I had never anticipated feeling so free. This feels like a somewhat ironic sentence to write. I can imagine that someone reading this may be thinking, “Free? Really? In a country where you were shouted at every time you walked outside in public and felt afraid to walk alone at night?” Yes. Kind of. I will try to explain it as best as I can, but please bear with me, as I’m still trying to figure it all out for myself.

Kampala, with all of the shouting, traffic, pollution, and poverty that it has to offer, is imbued with a vibrant soul that is only felt by those who understand it. I know this to be true both because I have felt it firsthand and because I have spoken to many people who have enthusiastically agreed with this assertion. It probably isn’t the most beautiful city in the world. It’s not on the ocean, nor is it exactly wealthy. It is, however, a city of sunshine, red earth, many hills, and an abundance of palm trees. All of Uganda has a certain vitality to it. Whether it’s a woman braiding her daughter’s hair, a man selling fruit on the side of the road, or a child carrying water to their home in jerry cans, everybody always seems to be doing something. Rarely do they seem exhausted or miserable. In fact, to my mind, they generally seem to be much happier than the average person one might encounter in North America.

There is also a very different mentality in Uganda by contrast to Canada with regards to time. Scheduling and planning – which are essentially second nature in the western world – do not hold the same influence over Ugandans. One might often hear jokes about “Africa time.” Africa time is, for example, when you tell someone you will meet them at 10:00 AM and then only show up at noon, and nobody thinks anything of it. Rarely did a work meeting begin sooner than 45 minutes later than its set time. Again, nobody ever seemed to be particularly stressed over this. If I told a boda boda driver to pick me up in ten minutes, it was because I knew I was only going to be ready to leave in twenty. This was a significant aspect of Ugandan life that helped to feel liberated during my time there. It might have also been a part of why coming back to the western world felt like something akin to suffocation for a while. 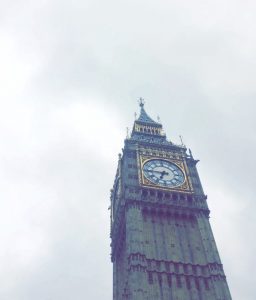 There is also a feeling of liberation involved in being a white person in East Africa. As young females especially, whether or not we are always conscious of it, we live under the constant impression that we are being scrutinized. We aim to look a certain way, we dress in a certain way, and we even walk, sit, and stand in a certain way. Being in Uganda, I knew that I was going to be noticed and stared at no matter what I did. There was no way around that. It took me a while to get to this point, but eventually, I came to find this realization very liberating. It didn’t matter what I was wearing, how I looked, or how I walked, because people were going to stare at me either way. Since nobody there knew me previously, I was free to do and act as I pleased, and to let go of some of the unconscious stress and awareness of judgment that governs so much of my behaviour on a daily basis back home.

To be painfully honest, all of this, combined with the facts that I was on a different timezone from everybody who had ever known me and that I had limited internet connection, allowed me the space and freedom to discover parts of myself that I’m not sure I had known existed. It’s a very liberating feeling, to say the least.

Well, that’s about what I have to say on Uganda and its gift of reverse culture shock. Thanks for reading my blog! If you’re reading this because you’re considering visiting East Africa, I hope that my experience functions as a helpful push in that direction. Challenges will certainly present themselves from time to time, but I can guarantee that the positive aspects will far outweigh the negatives. You cannot put a price on the self growth from which you benefit when you succeed in making a home out of an unlikely and unfamiliar place. It wasn’t always easy, but it most definitely was worth it. 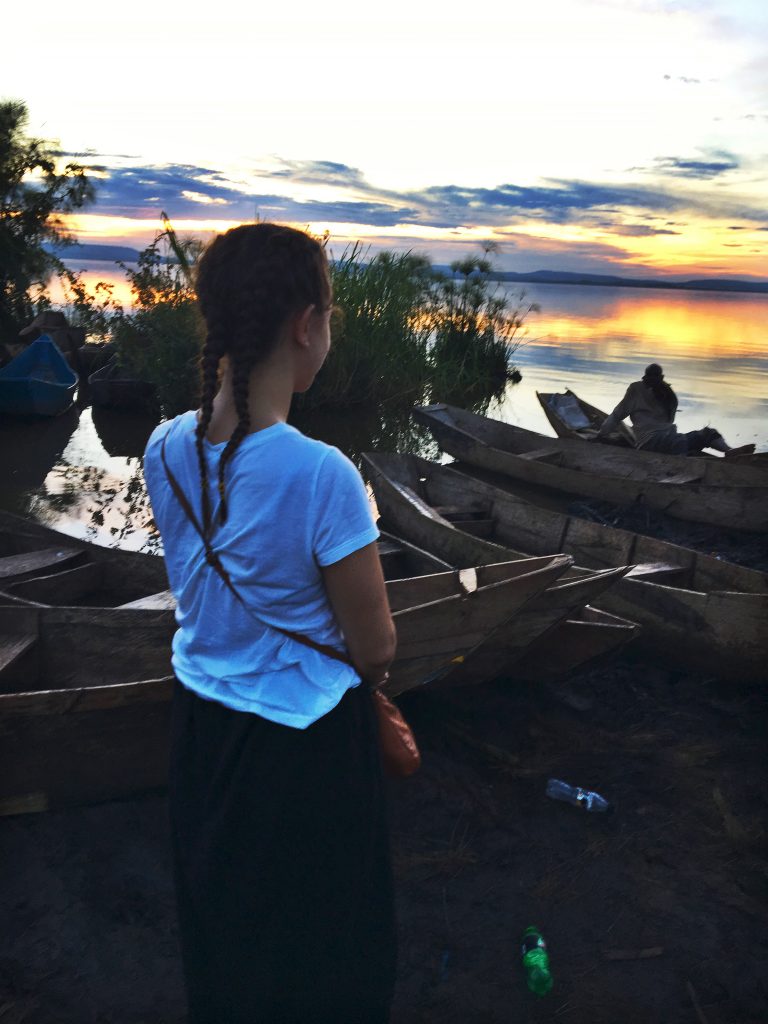