In mid-June I had the opportunity to travel to the island of Kinngait (ᑭᙵᐃᑦ), Nunavut for circuit court. Kinngait is known as Cape Dorset in English and is located on the southern tip of the Baffin Island in the Qikiqtaaluk Region of Nunavut. 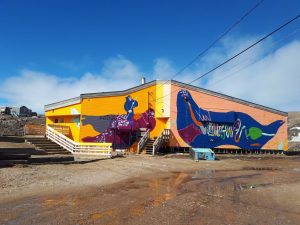 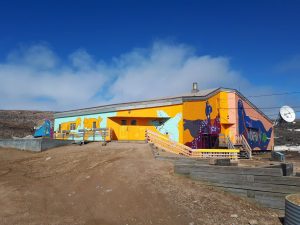 [The Community Hall of Kinngait where the circuit court took place for the week. The Hall was painted by local youth.]

Kinngait is the epicentre for Inuit art, world-renowned for its prints and carvings. The carvings are largely made from serpentinite stone which ranges in beautiful green hues. The stone is quarried from Korak Inlet and Markham Bay approximately 200miles from Kinngait. The sheer success of Inuit carvers in this region is exemplified by the quantity of rocks quarried each year: approximately 40 tons of serpentinite is quarried each summer and transported to Kinngait by boat or snowmobile.

Community members of all ages engage in carving as it has become an important mechanism for people to engage in the wage economy within Kinngait, Nunavut, and throughout the world.  Importantly however, carving is a direct expression and embodiment of Inuit culture and the land that surrounds them. 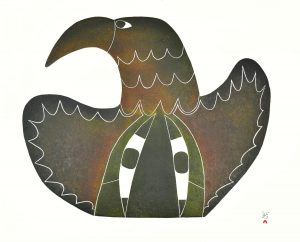 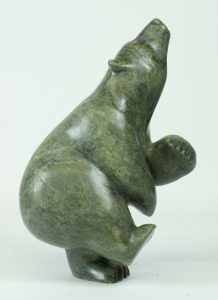 The dancing bear is perhaps one of the most prominent subjects within Inuit art and first developed in Kinngait. The dancing bear symbolizes the strong relationship in Inuit culture between the natural and spiritual world. When shamans seek to communicate with those no longer living or community members in faraway places, they dance while playing drums in order to summon thetuurngaits (spirits). When a tuurngait arrives, the visible appearance of the shaman alters and his tarniq (spiritual essence) and arnirniq (breath of life) merge together with those of the tuurngait. This nexus causes the shaman to act like a bear or adopt the form of a bear while playing the drums and dancing.

During my time in Kinngait I was fortunate to visit the Dorset Fine Arts studio with numerous prints and sculptures created daily by local artists. While walking around the town I was also able to view sculptures created by local people in their homes. The art in Kinngait is truly amazing, as is the community, and land surrounding it. It is incredible to think that in a community of approximately 1,500 people their art can be found throughout Canada and the world. 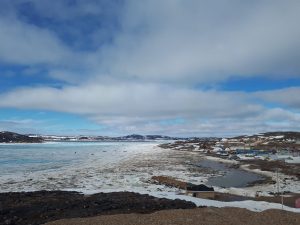 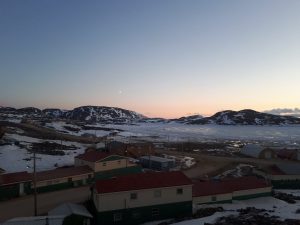 [Picture 1: The bay of Kinngait. Picture 2: Kinngait at its darkest hour.]