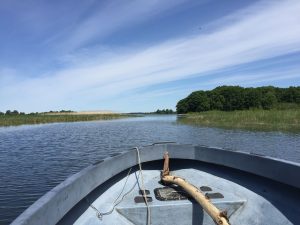 The Mohawk community of Akwesasne is connected by rivers and divided by international and provincial borders. It sits at the confluence of three rivers—the Raquette, the St. Regis, and the mighty St. Lawrence—which serve as highways, trade routes, and reliable sources of fish. Akwesasne also sits at the intersection of three settler jurisdictions—Ontario, Quebec, and New York State—giving rise to jurisdictional issues that complicate Mohawk efforts to protect the rivers from harm.

The health of the rivers, and their ability to provide healthy food, has been degraded by heavy industry, hydroelectric development, and the construction of the St. Lawrence Seaway. These developments continue to have adverse effects on the environment, restricting the ability of Akwesasro:non to fully engage in fishing and other subsistence harvesting activities. Although heavy industry has largely disappeared from the shores of the St. Lawrence River, its legacy persists in local wildlife and the contaminated riverbed, with enduring health consequences for Akwesasro:non and other local people.

Akwesasro:non have won partial compensation for these environmental harms, but they continue to fight for enhanced environmental cleanup and a leadership role in environmental management. These efforts are complicated, however, by the complex jurisdictional arena.

The international border divides Akwesasne into two parts: the St. Regis Mohawk Reservation (in the United States) and the Akwesasne Indian Reserve (in Canada). The Canadian reserve lands are further divided into three districts: Kana:takon (or St. Regis Village) and Tsi Snaihne (or Snye) in Quebec, and Kawehno:ke (or Cornwall Island) in Ontario.

The Akwesasne Justice Department, under the Indian Act band council government in Canada, has sought to exercise Akwesasne jurisdiction in environmental protection. Legislative development and enforcement efforts are making significant progress in this area, despite ongoing capacity issues and the reluctance of settler governments to cooperate.

Akwesasne has an acute interest in the management and conservation of fish and their habitat. It aims to exercise its jurisdiction in this area by enforcing its own environmental laws. It is currently updating a 1989 Wildlife Conservation Law and drafting a new water law, which should improve its ability to protect the rivers and wildlife on Akwesasne Lands.

The rivers of Akwesasne have been negatively impacted by industrial pollution from both Canada and the United States. Decades of dumping from now-shuttered factories—including the Domtar pulp mill in Cornwall (Ontario) and the General Motors and Reynolds Metals/Alcoa facilities in Massena (New York)—has resulted in the accumulation of polychlorinated biphenyls (PCBs), heavy metals, and other pollutants in the ecosystem. Efforts to dredge up, remove, or cap contaminated river sediments have been somewhat successful, but pollutants continue to circulate in the ecosystem and affect human health.

The health risks of consuming contaminated fish must be weighed against the cultural value of subsistence harvesting in Indigenous communities. Akwesasne governments advised Akwesasro:non to restrict their consumption of locally caught fish when the health risks emerged, but some consumption still occurs; fish remain an important component of the diet of many Akwesasro:non. Fishing also helps to reaffirm the connection between Akwesasro:non and the natural environment, thus serving an important cultural role in the community.

The constraints of the Indian Act have not stopped Akwesasne from exercising its inherent right to govern its lands and waters. Akwesasne Laws are being applied to protect the rivers and wildlife on Akwesasne Lands, despite jurisdictional uncertainties regarding enforcement powers and the authority of the Akwesasne Court—established in 2016—to adjudicate legal issues.

The Akwesasne Court has been tacitly accepted by the Canadian federal government, but full formal recognition from Canada, Ontario, and Quebec remains elusive. Apart from the 2013 Iatathróna Raotiientáhtsera ‘Couples Property’ Law, which uses the Akwesasne Court to adjudicate matrimonial real property issues, no Akwesasne Law with an explicit Akwesasne Court role has been formally approved by the federal government. Inter-governmental agreements are needed to formalize the Akwesasne Court’s jurisdiction and clarify its relationship with the courts in Canada, Ontario, and Quebec. Internal review and appeal processes will ideally capture most legal challenges, but Akwesasne Laws will need to be respected (and potentially enforced) by outside courts as well.

Akwesasne Conservation and Compliance Officers have been actively enforcing Akwesasne Laws, despite many of these laws—originally formulated as Indian Act bylaws—being formally disallowed by Indian Affairs pre-2000. Akwesasne Laws are now developed and enforced under Akwesasne’s inherent authority as a self-determining and self-governing First Nation. The federal government has not seriously challenged these laws or Akwesasne’s authority to enforce them, suggesting tacit approval. In addition, Akwesasne enforcement efforts have not been opposed by outside enforcement agencies. The Akwesasne Officers are beginning to gain the support of their provincial, state, and federal counterparts.

I recently observed Akwesasne enforcement efforts in a “ride-along” with Akwesasne Conservation and Compliance Officers. We spent a Saturday in June on the St. Lawrence River enforcing the 1989 Wildlife Conservation Law, including a requirement for non-Akwesasro:non fishermen to carry an Akwesasne fishing permit. We approached several boats with fishing lines in the water, but none of them—on this day—had their permit. Most of the fishermen pleaded ignorance and complained about the unclear jurisdictional boundaries. These are Akwesasne waters? I didn’t know. The officers did not write any tickets, but they invited the fishermen to buy the $10 year-long permits from them or at a local marina.

Akwesasne Laws encouraging responsible fishing are just one element of the community’s efforts to protect the rivers and wildlife. Although their relationship with outside courts and enforcement agencies remains somewhat murky, Akwesasne Laws have the potential to significantly improve ecosystem and community health. And with the authority of Akwesasro:non and their elected governments behind them, they are likely to gain the recognition needed for deepened environmental cooperation with settler governments.