On Thursday, May 23rd, I had the pleasure of attending the exoneration of Chief Poundmaker at Cut Knife Hill with the Wiyasiwewin Mikiwahp Native Law Centre and its students from the Summer Program. 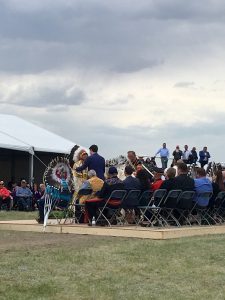 Chief Poundmaker was convicted of felony-treason in 1885. Earlier that year, Chief Poundmaker went to Fort Battleford to speak with Indian Agent Rae about the worsening of conditions on his reserve and that the rations promised under Treaty 6 were not being supplied. Upon arrival, they were met with an empty town, as townspeople barricaded themselves in the police post. Chief Poundmaker and his men waited two days to speak to the Indian Agent but to no avail. The town was looted although the identity of the looters was never confirmed. The federal government then sent troops in response and attacked Poundmaker and his band at Cut Knife Hill but were driven back. Poundmaker told his warriors to not pursue the retrieving army. To keep the peace, Chief Poundmaker turned himself in. He was charged and found guilty of felony-treason. 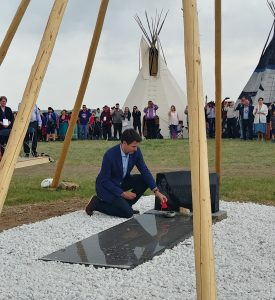 The event highlighted the false nature of the narrative previously put forward by the government that Poundmaker was a traitor to the Canadian State. Emphasizing Poundmaker’s leadership in driving his men to abstain from attacking the retrieving Canadian troops led by Lieutenant-Colonel Otter at Cut Knife Hill. Poundmaker’s leadership saved hundreds of lives. Trudeau’s apology sought to highlight Poundmaker’s mark in history as being that of a peacemaker, and not that of a traitor (as he was previously labelled). 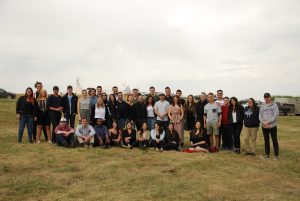 The event placed emphasis on the notion of reconciliation. In his speech, Trudeau argued for the importance of the Canadian government to acknowledge its past wrongs in order to move forward with reconciliation in the future. Referencing the story of the man who sat by the trail too long that the trail grew over and he could no longer find his way, Trudeau stated that the government has been “sitting beside the trail for far too long.” Pushing for further government actions, Alma Favel stated that she hopes that other communities seeking the exoneration of their leaders can also achieve such a goal.