Before leaving for Kenya, I had a Skype call with Jenna, an intern from U of T who I would be spending the summer with, as well as Fiona Sampson, the CEO of the equality effect (e²). While Fiona talked with great enthusiasm about the amazing work e² does fighting for justice for survivors of sexual violence, she emphasized that internships with her organization tend to be a little unpredictable. Her repeated advice was for us to be ready to “expect the unexpected.” Little did we know that the “unexpected” would begin before we even touched down on Kenyan soil.

When we accepted the internship, Jenna and I had been told we would be spending the summer on a rural compound that houses survivors of sexual violence near a place called Meru in central Kenya. Two days before we were meant to fly from Toronto to Nairobi however, we received an email from Fiona asking us if we would be open to starting our internship in Mombasa, Kenya’s second largest city, instead. Fiona explained that one of e²’s partners there called the International Centre for Reproductive Health Kenya (ICRHK) was very keen to host us for some of the summer. After a quick Google search of the ICRHK I decided I was game, and Jenna and I emailed Fiona telling her we were down to switch things up. When we boarded the plane together in Toronto, the last message we had received from Fiona was her telling us that she would be in touch ASAP to confirm if Mombasa was a go.

Our flight to Nairobi included a fourteen-hour layover in Amsterdam, which we thought would be nice since neither of us had ever been there before. Given the time difference we knew we would be exhausted when we arrived in the Netherlands, so we had planned a fairly low-key itinerary. However, when we connected to the Wifi at the Amsterdam airport we had yet another email from Fiona with even more “unexpected.” She told us she was still waiting to confirm about Mombasa, but had another question: would we be interested in going to the Hague to attend the World Justice Forum on behalf of e² during our layover? It turned out that on that particular day there was a conference going on at the World Forum (right across from the International Criminal Court) for people working in international human rights law. The e² staff who was supposed to be there for the last day of the conference wasn’t able to make it, so Fiona was wondering if we would be willing to step in for her. Despite the fact that we looked and felt the way one does after an overnight international flight, Jenna and I decided we were both interested. Within an hour of touchdown in Amsterdam, we were in a taxi on our way to the Hague for the conference’s 8 am start.

We arrived at the World Forum, haggard and exhausted, but the excitement about where we were soon took over. We spent the afternoon mingling with incredible human rights professionals from around the world, attending workshops on different access to justice initiatives, and listening to speeches from inspiring people who were doing all kinds of interesting work for vulnerable people. When Fiona asked us to attend she had mentioned that e² had been nominated for one of five $10,000 awards that would be handed out that day. According to her, the chances of e² actually winning were very slim, so she assured us th

at we needn’t worry too much about having to go accept an award.

Given that by the time the award was being announced Jenna and I had both been awake for over 24 hours and gone even longer without a shower, we were grateful to think that we could just sit back and enjoy the final part of the conference before we headed back to the airport. However, just as we were settling into our seats and cracking jokes about how funny it would be if we had to go up on stage and accept an award in our current post-flight state, they announced the first winner: the equality effect!

We laughed our way all the way up to the stage, unable to believe the absurdity of it all. There we were, in front of a room full of 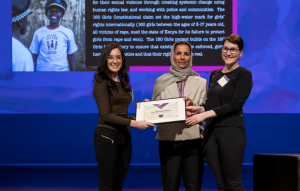 hundreds of well-dressed human rights lawyers and other professionals, wearing running shoes, athletic wear, glasses, and completely sleep-deprived. Things got even better when they asked one of us to give a speech and Jenna jumped on the mic to read the dialogue Fiona had sent us “just in case” we won but couldn’t get the email to open on her phone. She wound up free-styling, but whatever she said came out perfect. The room went wild with applause as we stepped off to the side to be photographed holding our huge framed award.

Because of how little sleep I had gotten for the entire duration of this ordeal, it still feels hard to believe it even happened. Luckily, the World Justice Forum had plenty of professional photographers on deck to get our classy airplane looks from every possible angle. It’s not exactly h

ow I imagined my first time accepting an award for international human rights work would be, but I quite honestly can’t think of a better story. At some point in all the madness we received an email from Fiona confirming that Mombasa was a go. As we boarded the flight from Amsterdam to Kenya, we both couldn’t help repeating that the summer really did seem to be shaping up to unexpected after all – in the best way possible.