Akwesasne is a Mohawk community, which borders two Canadian provinces and the United States. As someone put it on my first day, it is a community with its own legal system that has to co-exist with American federal law, Canadian federal law, New York State law, Ontario law and Quebec law; a jurisdictional puzzle!

The community has four main districts: Cornwall Island, St Regis, Snye, and the Southern district. The first three are territory on the Canadian side, while the last one represents territory on the US side. Looking at the map above, you’ll notice that to get to each district, you need to cross through the US. Wherever you live, chances are you need to cross the border to do your shopping, pick up your kids, go to work, ect.

The official border crossing is on Cornwall Island. Although the island is entirely on the Canadian side, it sits strangely in between the Canadian and US border terminals. This crossing causes all community members a lot of hardship. You would think that they have processes in place to accommodate Mohawk individuals who are forced to cross it everyday, but this is not the case. On the contrary, there are rules in place that force community members to report to the border when they leave the different jurisdictions. Anyone coming from the US side, needing to go to Cornwall Island (which is only 5-10 km away) must drive up to Cornwall Island through the US Border, continue driving past their destination, report to the Canadian border, and then return. This is approximately a 30-minute detour. And if anyone does not do this, their car is seized and they are slapped with a hefty fine ($1000 for the first offence, $2000 for the second, ect). This is possible because of the cameras that have been set up to register license plates and the time that they cross; if you do not report within 10 minutes or so, border officials are alerted by the system and told to seize your vehicle.

The absurdity of this process is impossible not to notice when you work here. The Akwesasne Court, for example, is located on Cornwall Island, yet the Justice Department (where I work) is in St Regis. If I need to go to the Court, I must drive past it, report to the border and then come back (in addition to crossing the border daily on my way to and from work). Many people in my office make at least one trip to the Island every day, meaning they spend a lot of their time simply reporting to the border, going through customs, just to turn around. Not to mention if you live there, you also have to report every time you come home.

For me, it is difficult to fathom why either government thought it was appropriate to place a border in the middle of this community. There are two theories in my office: 1- it was an attempt to assimilate Akwesasne (which failed); or 2- it is a punitive response to the fact they did not assimilate.

One of my tasks this summer is to go through hundreds and hundreds of files of border misconduct and unreasonable car seizures, which are part of a class action suit that the Mohawk Council of Akwesasne filed against the border in 2015. Although I cannot write more on this work (as much of it is confidential), I want to stress how saddening it is to read about so many incidents of misconduct and abuse of power and how little sympathy either government or their border agents have for community residents.

Funny enough, I have my own border troubles. I am driving a California plated car (long story!) and if you didn’t know, driving a US-plated car as a Canadian citizen in Canada is illegal unless you import it. Within three days of starting my internship, I was charged almost 1000 dollars in taxes, detained, and lectured to by several CBSA officers about my mistake. The American border has also flagged me as suspicious; I have been stuck for way too long trying to explain my internship, where I’m from, why I have this car, and must report to them every time I leave the US (which is every day at least once)! Nevertheless, the more I cross, the easier it gets, especially as people begin to recognize me.

Some of my colleagues think this is funny and joke that I am getting the “true” Akwesasne experience. But the reality is, I’m not. Despite my border issues, I am treated better than many Mohawk individuals. I know this because I have access to the files. Many Mohawk people are still arbitrarily searched, held, and verbally abused on a daily basis. Sometimes, border officials make rude remarks about their status cards and demand more documentation than is required under the law. In many cases, they are outrightly racist. They seem to have little regard for their time and sometimes, no respect for who they are. Although they use the border every day to travel within the borders of their territory, they are treated poorly on land that was stolen from them.

PS: Border struggles aside, here are some photos of how beautiful the community is! 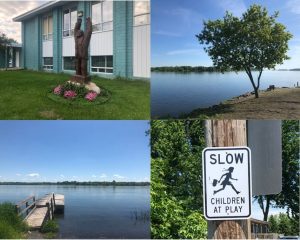