While in Kuujjuaq I decided to go to the court house as it looked to be in session (Kuujjuaq, like nearly all of Inuit Nunagat, has an itinerant court system and court is only held during certain weeks). My visit to the court began like every one of my visits to the Kuujjuaq courts: with the white staff assuming I was there for my own matter as an accused. I approached the right worker and used all the right legal terms when asking to see the docket. Despite this display of understanding, I was assumed to be charged with my own criminal offences. Even if it was court within Inuit Nunagat, I had approached non-Inuit in their world, the world of (Euro-Canadian) law. And in their world, Inuit can only ever attend court when forced to attend for a matter we are personally implicated in.

This wasn’t the first time I was assumed to be an accused in Kuujjuaq’s courthouse. The change this time around was that it was stated plainly and out loud whereas in the past it was implied through the scornful eyes of the white sheriffs who watched me closely, like how one would be on-guard in the presence of a wild animal. This experience set the stage for an interesting summer working in law, and it underscored being the first Inuk student sent North from McGill to Nunavut Legal Aid for this placement.

From Nunavik to Nunavut 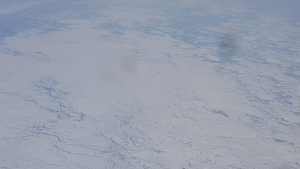 Part of the summer of change was flying north from Kuujjuaq, rather than returning south to Montreal, or flying out to one of the other communities in Nunavik. Flying north across the bay to Iqaluit was a wonderful change as the ice had just broken up for the summer, making the ocean more icey-white than deep blue. Kuujjuaq has the largest and most modern airport in Nunavik, but it could not prepare me for the recently-built airport of Iqaluit, where massive murals of acclaimed Inuit artists such as Kenojuak adorned the entirety of walls.

I had never seen such a massive display of Inuit culture in one place before, and this truly demonstrated how Iqaluit is the capital of Inuit Nunagat in Canada. I drove through Iqaluit, marveling at the difference of the landscape compared to Kuujjuaq. All around me were rolling hills, even across the water all I could see were hills. The size of Iqaluit stunned me, despite coming from the largest town of Northern Quebec. 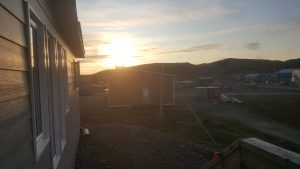 This summer I lived in Apex, a community where in the recent past only Inuit lived when Americans and other white people were the only people allowed to live in Frobisher Bay(now Iqaluit). Apex alone reminded me of entire communities I had seen in Nunavik. Once I had dropped my suitcase off in Apex, I returned to town, where my 1st stop was the court house.

In court, predominantly Inuit sheriffs staffed the doors, and their first thoughts were not to treat me like a criminal. This was a drastic change from all of my experiences of court in Nunavik, and it comforted me to receive this sort of reception. The courthouse itself also set me at ease: instead of the standard (and rather drab) layout of Kuujjuaq’s tiny basement courthouse, all courtrooms in Iqaluit featured architectural elements taken from traditional Inuit items such as iglus and qamutiit. There were Inuit clerks with traditional face tattoos, Inuit interpreters, and even Inuit counted among the justices of the peace and members of the prosecution.

This truly was a change from my experiences of Nunavik.

Within a short time, I felt at home. It felt great to be living and working up north (even when woken up early by noisy ravens and the bright light outdoors during ‘nighttime’!), and to be respected for my contributions over the summer. I was given important tasks and even spoke in court several times for matters such as contested bail hearings and modifying bail conditions on consent with the Crown.

It was fulfilling to begin gathering experience of what it is like to work up north, as I hope to eventually practice in Nunavik one day. I learned how to help Inuit clients navigate the criminal justice system, as many people have English as a second language.

From the Capital to the Circuit

Beyond these localized experiences, it was truly rewarding to be valued by the staff at Maliganik, as the lawyers were welcoming and open to furthering my knowledge of criminal law. This rewarding and welcoming behavior was exemplified by their willingness to send me on circuit to the community of Pangirtung, where I was integral to the work of the lawyers on circuit. I met with clients and prepared material essential to their files. While I did not get to speak on circuit (because of typical circuit court delays, which meant court was in session from 9:30 am until 9:00 pm!), what I prepared was presented verbatim by the lawyers, and it was pleasure to contribute to our clients’ cases in meaningful ways.

This experience on circuit was yet another change from my experience in Iqaluit: the glamourous courthouse was replaced by the community centre recreation room, my modern office at Maliganik was replaced by the community centre boiler room, where I had jammed in folding chairs amongst their old boxes to take their information and discuss their files. This change taught me invaluable experiences on how to manage criminal files in circumstances unlike the typical setting for professions such as law down south. The resourcefulness required while on circuit will surely guide my future studies in law, and I am grateful to have experienced it. 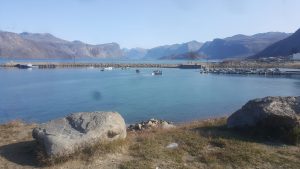 Furthermore, I am grateful to have seen the beauty that is the land around Pangirtung. Where I once marveled at the hills of Iqaluit in comparison to Kuujjuaq, I am now truly awestruck by the mountains of Pangnirtung. Between the massive mountains, a deep fjord snakes its way past the bay, through the sheer cliff faces and beyond into Auyuittuq National Park. Landing in Pangirtung was magical, and the entire time I was there I was amazed by the land. The first day of the circuit, I had arrived promptly at 9 am, only to find out the first day of circuit starts at 11 am. While normally I would be upset to miss a few more hours of sleep (and a bigger breakfast, of course!), I was lucky enough to see two bowhead whales swim from the bay and up the fjord. There were many whales in the area during the course of the circuit (mostly bowhead and narwhals pushed into the area by the presence of killer whales), and while those were the only I got to see with my own eyes, the excitement of the town was palpable.

I returned from Pangnirtung to find that landing in Iqaluit was now a familiar and comfortable experience, rather than a new and exciting one like it was at the start of the summer.