In preparation for international internships like this one, students are often warned about a phenomenon known as “culture shock.” According to the Cambridge English Dictionary, culture shock is defined as “a feeling of confusion felt by someone visiting a country or place that they do not know.”(1)  Interns are told, or we read, that upon arrival in a new place, especially somewhere as far away as “Africa” that we will be exposed to new sights, new smells, new social cues and new foods that will likely cause us to miss or even mourn home – what the literature on culture shock calls our “abandoned culture” (2).  I won’t lie, I did feel a certain element of shock upon arriving in Uganda. The most intense period probably lasted about two or three weeks, but to be honest, the lingering discomforts and confusion remained until my last days in the country.

For me, the shock of being in a new place did not present itself in the “typical” ways, or at least not in the ways that I was expecting. What I mean by that is that it was not the food or the lack of sidewalks or the religious prayers before each work meeting that were the most difficult aspects for me to adjust to. Yes, I faced challenges with some foods, especially as a vegetarian, and yes, I certainly found it claustrophobic not being able to walk around my neighbourhood alone (particularly at night). For me, the biggest challenge I felt in terms of “culture shock” was my inability to even remotely understand the lived experiences of the many people I met, and most especially the people with whom I worked – both clients and colleagues.

The Gender and Sexuality program at Refugee Law Project (RLP) assists refugees who have experienced sexual violence and sexual torture and helps connect them to medical and other support services. As an intern, I interviewed clients about their history and what in particular was bringing them in that day. The stories I heard are, I would imagine, for most people born and raised in Canada probably unimaginable. It was utterly disturbing to hear about what instability, war and conflict allows human beings to do to one another. What was equally disturbing, however, was the lack of awareness about some of what is currently going on in areas of conflict – for example, the perpetration of sexual violence and sexual torture against men,  a current focus of RLP’s. During these sessions, I could nod my head and listen actively to the best of my ability, but I knew that at the end of the day, there was nothing I could personally do to help the client’s situation. I couldn’t heal their wounds, give them money for their children’s school fees, or as some people requested, bring them to Canada for a better life. I could only take down notes and hopefully give them a referral to a doctor, but even that depended on what funding was available and whether it applied to that individual and their particular circumstances. At the end of the day, I would pack up my Macbook Air, fill up my S’well water bottle, pull out my cellphone and call an Uber to my secure compound after stopping by the grocery store, all the while knowing that the client I saw that day was starving themselves to save up enough money to send their child to private school so that they can get a decent education (several people have told me that in Uganda, if you send your child to public school, the children are so unsupervised that most come back unable to read and write and many girls in particular end up ditching school entirely in order to make money engaging in prostitution) . This, for me, was the most intense form of shock or confusion I experienced in Uganda. I felt shocked and confused by the deck of cards I have been dealt compared to others; shocked and confused by my privilege and all that my peers and I consider “basic needs;” shocked and confused by the things I have taken for granted. I don’t think there’s much that can prepare you for those complicated feelings of horror, shame, guilt and sadness. I was nothing short of smacked in the face by the fact that my quality of life is so much better than someone else’s for no reason at all, except that I were born in a different place – a place free of conflict and instability – under entirely different circumstances. When that reality is staring you in the face, it really is nothing less than shocking and, for better or for worse, it is the type of shock that doesn’t really go away.

However, as I write this blog post, I can’t help but feel guilty (or at least some complex version of guilt) for spending 1000 words talking about my experiences with “culture shock” during my McGill University human rights internship in Uganda. After working at RLP with individuals who have been forced to flee their home for unimaginable reasons, I realize that the idea of feeling culture shocked is a privilege in and of itself. Indeed, most of the individuals I have been working with at RLP have experienced such horrific things that they do not have the time or the wherewithal to feel culture shocked, despite the fact that they are in a new country, generally living in slums with pe 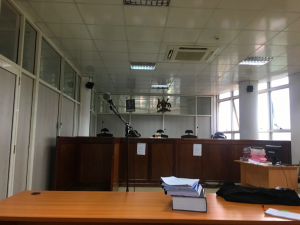 ople they have never met, often separated from family and friends for an indefinite amount of time. This is in contrast to me, a law student who is in Uganda by choice for a limited amount of time, fully aware that I will be returning to my peaceful and stable home where I will be greeted by my family. Unlike me, the migrants I have met at RLP do not have time to feel culture shocked. No; they are far too busy focusing on how to seek treatment for their wounds from torture, how to pay for their children’s school fees and in some cases, how to locate family members, even children, from whom they have been separated for many months, if not years. My “culture shock,” which the literature aptly calls uncomplicated culture shock is, I have come to realize, one of the most significant forms of privilege I have encountered during my time in Uganda (3).

(2) Garza-Guerrero AC, Culture shock: Its mourning and the vicissitudes of identity, Journal of the American Psychoanalytic Association, 1974 Apr;22 (2):408-29.