Like most other communities in the world right, the COVID-19 pandemic has profoundly impacted the Mohawk community of Akwesasne.  However, while many of the disruptions to daily life Akwesasronon (Akwesasne community members) are experiencing may be familiar to outsiders, such as the need to practice physical distancing, working from home, and wearing a mask in public, one way in which this pandemic has impacted Akwesasne is quite unique: the Canada-US border closure.

A Community Divided by the Border

Akwesasne, a community of approximately 13,000 people, straddles Ontario, Quebec, and New York—a jurisdictional headache at the best of times. Larissa Parker, last summer’s intern at the Akwesassne Justice Department, blogged about Akwesasne’s unique jurisdictional challenges and the impact of the international border on Akwesasronon. To further complicate things, the part of Akwesasne that is in Quebec is an exclave—meaning it is only accessible by land via the US. In short, crossing the Canada-US border is an unavoidable daily reality for those living and working in Akwesasne. 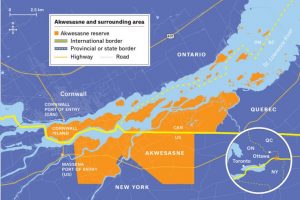 All non-essential land travel between the Canada and the US has been shut down since March 21, 2020, as a way to limit the spread of COVID-19.  Initially announced as a month-long measure, this restriction on cross-border travel has been extended 4 times already, with predictions that it will stay in place for the foreseeable future. Further, anyone entering Canada from abroad is required by law to quarantine for 14 days. This has meant that my internship with the Akwesasne Justice Department has had to become remote. The Justice Department office is located in the Quebec exclave part of Akwesasne, meaning I would need to cross the border and report entry twice to get to the office and twice to get home every day.  Although there are exemptions to this border closure for critical healthcare and infrastructure workers who need to cross the border to get to work every day, my internship does not qualify for one. Closing the border and requiring 14 days of self-isolation following any border crossing for Akwesasne residents, however, is simply not practicable.  Residents need to cross the border to buy groceries, go to work, and access essential services such as banks, daycares, and healthcare providers.

Indian Status and the Right to Freely Pass

From the Treaty of Paris in 1783 and the Jay Treaty of 1795, to the Treaty of Ghent in 1812, the US and Britain signed a number of agreements establishing part of what is now the Canada-US border.  These agreements are ultimately what led to the community of Akwesasne being divided across jurisdictional boundaries.  Also included in the Jay Treaty and then reaffirmed in the Treaty of Ghent, is a recognition of Indigenous peoples’ right to freely pass the border. However, while the US recognizes the Jay Treaty, Canada does not.  That being said, residents of Akwesasne have been granted an exception under the current border closure, so long as they identify themselves at the border with their Indian Status card.  The majority of Akwesasronon have Indian Status, meaning they are allowed to continue to cross the international border that runs through their territory throughout this pandemic.  However, those without a Status Card have been left stranded in the part of the territory where they live.

Border officials are only accepting Indian Status Cards (issued by the federal government), and not Tribal Identification Cards (issued by the St Regis Mohawk Tribal Council on the American side of Akwesasne) to cross the border.  Indian Status eligibility is set out by the Indian Act, and has been subject to many criticisms due to its history of gender discrimination, its criteria that focuses on “blood quantum,” and the fact that it gives Ottawa the right to determine who is an “Indian,” rather than First Nations, themselves. This requirement means that Akwesasronon who are accepted as Mohawk by their community but are not eligible for or do not currently have a Status Card are unable to traverse their territory freely. These individuals are subject to all the border restrictions currently in place for other Canadian and American citizens. These restrictions, in turn, are severing family bonds in the community.

Many families in the region have a mix of Status and non-Status family members.  As of 2011, only about three-quarters of First Nations people in Canada were Status Indians, although Akwesasne-specific data is not available. The child of a Status Indian and a non-Status Indian or non-Indigenous person may or may not be eligible for Indian Status, depending on which provision of the Indian Act their parent received their Indian Status under.  The current border restrictions could prevent a non-Status child from seeing both of their parents if their parents live in different parts of the territory, or one lives off-reserve.  The restrictions could also limit the ability of one parent to bring their child to the other parent’s home. Furthermore, there have been cases of non-Indigenous spouses not being able to attend funerals or other important (socially distanced) family gatherings as a result of this border closure.

In addition to the way this closure is impacting families, it has also cut off many Akwesasronon from home services.  People like cable technicians, appliance repairpersons, plumbers, and electricians are unable to access the homes of many people in Akwesasne as a result of this border closure.  Even where they may technically be eligible for an exemption as an essential service provider, many are unwilling to come to Akwesasne due to the intense scrutiny they face when crossing the border.  And as for those residents who are still able to cross the border, there have been reports of increased harassment by border agents who are weary of Akwesasronon’s constant border crossings and concerned about the perceived health risk this poses.

Staying Safe during the Pandemic

Akwesasronon have valid concerns about their continued ability to traverse the international border that cuts through their community. However, they also have fair reason to be concerned about the spread of the coronavirus in their community—the Canadian provinces and American state that surround Akwesasne have some of the highest infection rates in each country. In Canada, Ontario and Quebec have had the highest number of cases throughout the pandemic, with approximately 39,000 and 59,000 cases, respectively, confirmed to date.  Combined, this accounts for 85% of all cases in Canada. In the US, the state of New York was the epicentre of the pandemic towards the start, and now has the third highest number of cases confirmed, with 418,000, accounting for 10% of total cases in the country. So how is the community protecting itself from the spread of the coronavirus amid constant cross-border movement between regional hotspots?

Akwesasne has imposed its own quarantine requirements. Anyone who enters the territory from outside of the 50-mile (80-km) radius surrounding Akwesasne is required to self-isolate for 14 days.  This means that anyone coming from any of the major city hotspots near Akwesasne (Toronto, Montreal, New York City) is required to self-isolate upon entering Akwesasne, regardless of whether they crossed the border.

This approach seems to be working.  Since the start of the pandemic, there have been a total of twelve COVID-19 cases in Akwesasne.  Considering its proximity to hotspots and its unique jurisdictional challenges, this low infection rate is all the more laudable. But, if Akwesasne’s own quarantine requirements seem to be effective at slowing the spread of the coronavirus, why are non-Status community members being excluded from travel exemptions?  The answer to this is probably the same as to the question of why community members are forced to go through border checkpoints every day in the first place—the Canadian and American governments have a history of interfering with and challenging Akwesasne’s sovereignty, and the actions taken during this global pandemic are no different.

Ultimately, Akwesasronon are used to dealing with border troubles.  From racist encounters with border agents, to heavy fines for delaying or failing to report entry, Akwesasronon have faced more than their fair share of border woes over the years, with a class action against the Canada Border Services Agency launched last year.

The community has adapted to having an international border run through their community, and they will adapt once again to the current border restrictions. But with no end in sight for this border closure, one has to wonder what the long-term impacts of these restrictions will be on the community.  While people around the world are wondering when life will return to normal, some Akwesasronon are left to wonder how many more months it will be until they can visit family members a mere 15-minutes away.