Unless cited, the views expressed in this blog are my own.

A memorable event during my internship at the Instituto de Democracia y Derechos Humanos de la Pontificia Universidad Católica del Perú (IDEHPUCP) was when the center realized its sixteenth edition (virtually) of the Human Rights Conference titled “Bicentenario: 200 Años de Indiferencia”, or “Bicentennial: 200 Years of Indifference” in English. The week-long conference sought to visibilize historically marginalized groups, as well as identify challenges and generate proposals for stronger nation building by focusing on three axes of analysis: corruption, memory and inequality. 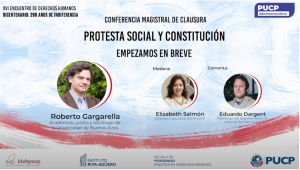 Following four days of panels featuring speakers from various origins and sectors of specialization, the event concluded with the closing keynote conference: “Protesta Social y Constitución” (or Social Protest and Constitution), by Dr Roberto Gargarella, a jurist and sociologist from the University of Buenos Aires. The keynote was also supported by Eduardo Dargent, a lawyer and political scientist at PUCP, and moderated by Elizabeth Salmón, the executive director of IDEHPUCP. In this event, Dr. Gargarella characterized social protests as “el primer derecho” or the ‘first right’ to which special deference and protection is owed, since the right to protest represents the possibility of defending all other human rights and freedoms. The right is not merely to the act itself, but rather to dissent, and to demand that the people’s dignity and interests be respected. He noted that presently, the right to social protest is surrounded by controversy. I want to further explore this fractured relationship that democratic constitutions have with their “first right”.

The right to protest corresponds to the right of peaceful assembly, which has been enshrined within international human rights doctrine, under Article 21 of the International Covenant on Civil and Political Rights, and as such all 173 states parties are bound to respect it. Likewise, this right is recognized according to Article 15 of the American Convention on Human Rights. In Peru, the right to assemble peacefully is guaranteed under Article 2, paragraph 12 of the country’s Political Constitution.

Even though peaceful protests are legally recognized as fundamental to all democratic constitutions, they are routinely stifled around the world by law, police force, or court orders. Obvious concerns arise from the excessive use of force deployed by the state against its civilians, and the potentially unconstitutional ways in which this freedom has been restricted via public property laws, for example. But I am equally concerned by the devaluation of the potential that this “first right” has to combat inequality.

Marginalized groups, without economic resources, are more likely to have their quality of life in the hands of the state. A state that finances social assistance, controls child and family services, public education and the penal system, for example. When government policies put special interests before human rights, those entrenched in these state-regulated bureaucracies feel the impacts most gravely. It is no coincidence that throughout history, socially oppressed groups have relied primarily on assembly rights to protest the systemic injustices suffered. Those who protest against the state often lack access to political influence, have no resources to litigate unjust government policies, and their minority interests are not always promoted by democratically elected bodies. Therefore, a crowd gathering as a form of disruption can become the only way to get attention, apply pressure, and demand political change. It is important to recognize, then, that protesting is both a phenomenon of necessity and a legitimate tool to take advantage of in a democratic society.

However, social protests continue to polarize and attract a controversial reputation. Why?

In my opinion, part of the answer lies in two mainstream narratives that are propagated by those who want to defend the status quo (or, more precisely, by the state who is being criticized). Distorted narratives are used to discredit the group of individuals who participate in the protests, by showing them as illegitimate messengers, who should not be taken seriously, or as immoral people, who should not be indulged. This allows the state to deflect systemic responsibility for the situation that generated the protest in the first place, and to divert attention away from the demands the protestors introduce.

We saw this tactic deployed in Canada last year when members of the legislative assembly referred to the defenders of Indigenous lands during the Wet’suwet’en ‘blockades as “spoiled kids,” whose main motivation for participating in any demonstration was “TikTok culture.” These types of character attacks are commonly used to undermine protesters, especially youth, in order to dismiss the legitimate concerns within their message. Likewise, these critiques wrongly characterize the act of protesting as pleasant, when in fact protesters are often subjected to tense scrutiny and the risk of violence or police abuse.

In the same sense, by qualifying the protesters as immoral individuals, it is possible to create a an imaginary confrontation between the interest of the protesters and the interest of the broader public. This is done so by qualifying protestors as “terrorists” or “criminals”, like former Colombian President Alvaro Uribe did when referring to those protesting against the 2021 tax reform in May (the reform sought to increase increased taxes for lower and middle income Colombians, and also raised taxes on utilities and food). It is important to point out that even in the case of demonstrations that involve violent actions, it is inaccurate and harmful to generalize the entire mobilized population as such. In effect, this language scares onlookers away from the scenes of mobilization, keeping them disconnected from the true message of those on the ground and exacerbates a social polarization, further excluding those who are marginalized. These narratives work to normalize the repression of dissent and also underestimate the real potential that social protests have to combat inequality.

It is also recognized that in circumstances where peaceful protests havve failed to create change, vulnerable groups may have valid reasons to engage in more disruptive means to combat the oppressive status quo. For this reason, it is worth analyzing the balance between material damage and obstruction of public space with the cause and objective of the social demonstration. To adequately protect the potential for equality that protests bring, it is necessary to create a very clear distinction between what constitutes never permissible acts of violence and what is disruption that still falls within the s of legitimate democratic protest. The current vague and narrow definition of what it means to be “peaceful” has allowed the power holders to weaponize the rule of law and carry out massive human rights abuses, when they decide that a protest no longer fits their definition of “peaceful” and therefore should not be protected. When the state justifies quelling protests in the name of stability and order, we must seriously ask ourselves: at what cost?

As Dr. Gargarella stated during his keynote address, most social anger has to do with inequality. We can think of the disruption caused by protests as a symptom that there is a tear in our social fabric – that a systemic failure is no longer bearable. This tension cultivates a democratic dialogue which provides an opportunity for education, negotiation, compromise or accountability.  By emphatically protecting the freedom of assembly, we can uphold a more compassionate and equal version of justice. Instead of avoiding the discomfort that protests bring, we could celebrate protests for social justice as an indication of an engaged citizenry that is committed to the wellbeing of the collective. We can shift our narrative and celebrate protesters as defenders of our democracy, of our constitutions and of a future where human rights are truly inalienable.