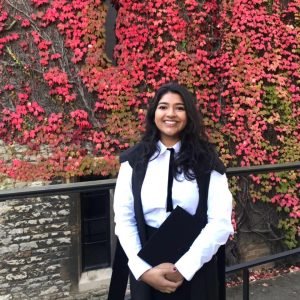 The views expressed in this blog are my own.

This summer, I have had the privilege of working with the International Justice Program (IJP) at Human Rights Watch (HRW), which works on accountability for genocide, war crimes, and crimes against humanity through fair trials. This includes monitoring institutional developments at the International Criminal Court (ICC) and domestic or hybrid courts tackling serious international crimes in various jurisdictions. With just a few weeks left at HRW, I have put together some key takeaways from my first two months as a legal intern in New York:

From researching Ukrainian judicial capacity to the Liberian constitution, my work has required me to get creative in my research methods. Researching Ukraine has been particularly difficult given the fact that I do not understand primary resources in Ukrainian. To overcome this, I have had to rely on translating webpages and finding secondary resources of organizations researching, monitoring and evaluating the issues that I have been tasked to research. While this is a relatively newer skill for me, my colleagues are masters at it. They do this work often, have a deep understanding of the subject matter and above all, really know how to use social media as a research tool, notwithstanding the country they are researching.

Inspired by their creativity, I have also found key information relevant to a legal analysis in non-conventional sources, such as the radio, which was important in a research assignment I did on the Special Criminal Court (SCC) in Bangui, Central African Republic.

While researching international human rights has been a challenging and sometimes frustrating process, I have found it deeply satisfying to have developed the ability to be flexible, open minded and curious in my research endeavours. No matter which context I am working on/in in the future, I know that this approach will serve me well.

Anyone who knows me knows that I have a crippling fear of rats. Everyone agrees that they are gross but for many years, I could not even say the word “rat” without feeling nauseated. I hoped that by going to New York for the summer, I would be confronting my fear head on; let’s call it shock therapy. In the first few weeks, I got VERY lucky. I didn’t see any rats and learned how to avoid using my peripheral vision at ground level to remain blissfully ignorant. The top tip I received was to never look on the subway tracks because well…you know.

However, as the summer got hotter and the garbage got hotter, the rat sightings became more frequent, especially in my neighbourhood: the East Village. It was definitely the right time for me to leave the city because in my last week I saw more rats than I had seen in my entire 8 weeks! It turns out that the shock therapy worked to a certain extent because I am less bothered by them now, although I will continue to never look down when visiting the city.

I did, you probably will. No elaboration needed.

Something that has been on my mind for the past few months has been what “justice” truly means and to whom. Of course, accountability can take many shapes and forms depending on the communities within which the term is defined. In terms of justice through criminal accountability, the most serious crimes can be prosecuted domestically, either in fully domestic courts or in “hybrid” courts (which have an international and domestic dimension), or internationally, at the ICC.

While the ICC is a court of last resort, it has an important role to play in ensuring victims’ participation in proceedings. One way to do this is the possibility of holding proceedings in situ — holding them “on site” in the jurisdiction within which the crimes were allegedly committed. Per Rule 100 of the Rules of Procedure and Evidence (which governs the ICC), the Court may decide to sit in a State other than the host State (i.e. the Netherlands) when is considers that it would be “in the interests of justice.”

Although the ICC has the authority to hold in situ proceedings in order to increase public/victim participation in the affected communities, thus furthering the “interests of justice,” the logistical and security concerns of doing so have hindered this from being an actual possibility. A recent example of this was in The Prosecutor v. Mahamat Said Abdel Kani, where the Trial Chamber decided against in situ proceedings, citing the risk of the accused fleeing, among other concerns.

If justice at the ICC is what affected communities want, in situ proceedings are a valuable procedural tool to ensure victims’ participation. However, the bigger question — and the one that remains unanswerable in this blog — is what justice means and looks like in every community affected by the most grave crimes. While criminal accountability through courts is crucial, so too may be other complementary approaches.

To close, I would like to take an opportunity to express my gratitude to the IJ team for providing me with a space to learn, grow and make mistakes over the last few months. It is a privilege to be surrounded by such an inspiring and accomplished team of zealous human rights advocates who have taught me what integrating the politics of care into a professional environment can look like.