This summer, I worked as a legal intern at the National Human Rights Council of the Kingdom of Morocco (CNDH), a constitutionally mandated, independent, and pluralistic national human rights institution (NHRI) that endeavors to promote and protect human rights and freedoms throughout Morocco. Since its creation in 1990 and subsequent restructuring in 2018, the CNDH has been at the forefront of the country’s human rights movement, helping to push the envelope on issues such as gender equality, the right to health, and the rights of incarcerated persons. In this post, I would like to share some preliminary insights into the role of NHRIs generally––and the CNDH in particular––in the international human rights field.

NHRIs are state-mandated institutions, independent from government, responsible for the protection and promotion human rights at the national level.[1] They serve a range of functions aimed as fostering domestic compliance with universal human rights standards, including handling complaints of alleged rights violations, monitoring the human rights situation within the country, undertaking awareness-raising activities, and issuing recommendations related to national laws, policies, and practices.[2] NHRIs are also accredited by the Global Alliance of National Human Rights Institutions (GANHRI)[3] based on their conformity with the United Nations Paris Principles,[4] a set of international standards to ensure the independence, plurality, and accountability of NHRIs. Through periodic reviews, they receive either an A status (full compliance), B status (partial compliance), or are denied status as an NHRI altogether.[5] 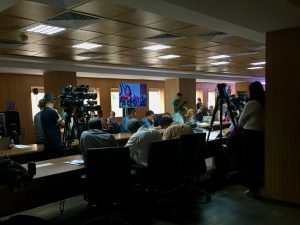 Press conference at the CNDH

It is a mark of the CNDH’s institutional effectiveness that GANHRI has accorded it A status since 2002. Its success in this regard has helped to cement Morocco’s reputation as a force for stability and democratization in the North African region. The CNDH’s President, Amina Bouayach, holds the position of GANHRI Secretary, and is regularly invited by INDH networks in the French- and Arab-speaking worlds, as well as by the Network of African National Human Rights Institutions (NANHRI), to share recommendations and good practices. Further, the broad protection mandate accorded to the CNDH under Law 76.15 (adopted in 2018) signals a renewed commitment on the part of Morocco’s government to human rights norms in the aftermath of the “Years of Lead,” a period from 1956 to 1999 characterized by widespread political repression and state-sponsored violence.[6]

Independence is a thorny question for NHRIs, whose credibility rests not only on the stability of their operations and level of autonomy from government––key ingredients enabling them to comment freely on a range of human rights issues without fear of reprisal––but also on their ability to remain sensitive to context, including the social, political, and cultural realities of daily life in different regions of the country. For the CNDH, this need for circumspection regarding existing societal dynamics means they are careful about how and when to broach different human rights issues. There were times when I found the officialism of the CNDH’s approach frustrating: the tone of its interventions, reports and press statements tends to be expository rather than directly critical, and it is rare to see politically sensitive topics such as the Western Sahara mentioned at all. Some critics have gone as far as to suggest that appointing activists to positions of prominence within the CNDH is a way of neutralizing them.[7] However, others would argue that CNDH’s institutional credibility rests on a certain talent for diplomacy with respect to the public, state bodies, and other national and international actors.

This diplomatic savvy is helped by the fact that Moroccans are, by and large, multilingual. Apart from Fusha (Modern Standard Arabic) and the local dialect of Darija (Moroccan Arabic), many people also speak, depending on the region, some combination of French, Spanish, English and Amazigh. Translation between these various languages is a constant feature of the CNDH’s work, especially in the Department of Cooperation and International Relations where my internship was based. With its composite identity (with roots in Arab, Amazigh, Jewish, and European culture), strong civil society, and 2011 Constitution that declares the primacy of international law,[8] Morocco is well-placed to act as a regional leader in the human rights field; but this means ensuring that the annual reports, conferences, press releases and other materials produced by the CNDH are accessible to a broad audience.

In the international human rights architecture, NHRIs have a role to play distinct from that of civil society, political dissidents, and human rights defenders. My short time at the CNDH has allowed me to better understand the importance of collaboration and dialogue among all these various entities and individuals as they work to protect human rights and guard against human rights violations in Morocco and elsewhere.