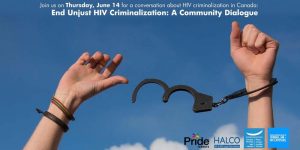 Last Tuesday, the Canadian HIV/AIDS Legal Network and the HIV & AIDS Legal Clinic Ontario (HALCO) hosted a community dialogue on the unjust criminalization of HIV in Canada. I attended, along with my colleagues, the Legal Network’s board members, and many community members.

Three panelists discussed what the movement to resist the over-criminalization of HIV has achieved thus far. They also outlined the work that still needs to be done, especially following Ontario’s provincial election (something I considered in my previous blog post). The unifying goal that brought everyone in the room together was putting an end to the misuse of the criminal law in addressing HIV non-disclosure issues.

Before I elaborate on what emerged from the discussion, it might be helpful to back up and provide some context on HIV criminalization in Canada.

Canada has one of the highest rates in the world of criminalizing people living with HIV. People living with HIV who do not disclose their status are often charged with aggravated sexual assault, the most serious sexual offence in the Criminal Code, even if they had no intent to cause harm and no transmission occurred. This is despite the overwhelming scientific evidence showing that sexual activity with a person living with HIV who is taking prescribed treatment poses a negligible risk of transmission.

There is scant evidence that the criminalization of HIV non-disclosure deters behaviour that can transmit HIV. Instead, it has negative consequences. For example, the fear of criminal prosecution may deter people from being tested and receiving adequate treatment. It also places the burden of preventing HIV transmission on those living with HIV and portrays them as potential criminals.

Thankfully, governments are beginning to recognize that HIV is, first and foremost, a medical and public health issue and that criminal prosecutions should only be used in cases of actual, intentional transmission of HIV.  After years of advocacy by community organizations, both the federal and Ontario governments have finally recognized the need to limit the over-criminalization of HIV in Canada. Both governments have decided to cease prosecutions against people with a suppressed viral load, since this is not consistent with the science of HIV transmission.

During the Community Dialogue, the panelists welcomed this shift as an important first step. It suggests that advocacy efforts and persistent discussions with the Ministry of the Attorney General have been effective. The next step is to ensure that the governments’ conclusions are reflected in clear prosecutorial guidelines at both federal and provincial levels, which would determine if and how a case arrives in court.

One of the themes that I found most striking during the discussion was the particular impacts of HIV non-disclosure laws on women. Criminalizing HIV non-disclosure is often perceived as a way to protect heterosexual women, since the vast majority of people charged under these laws are men who have sex with women and sexual assault laws are traditionally thought to protect women from gender-based violence. But if we dig a little deeper, evidence suggests that HIV criminalization actually puts women at risk.

Women are often the first in a family to be tested for HIV during pre-natal care, and the first person to test positive is often blamed for bringing the infection into the relationship. Women are more likely to be in coercive sexual relationships where they are prevented from making autonomous decisions about when and how sexual intercourse occurs, and many women often feel forced to choose between disclosure or risking abuse at the hands of their partners. Non-disclosure laws also mean that women are unlikely to report sexual assault or domestic violence if they are positive. Even more shocking is the fact that criminal charges are often brought against HIV positive women at the end of a romantic, consensual relationship by vindictive partners (as in the case of R. v. D.C., 2012 SCC 48). Ultimately, HIV criminalization does very little to actually protect women from violence and from transmission, and it does even less to empower positive women.

At the end of the Community Dialogue, three concrete suggestions were put forth for changing the law as it’s currently written and applied:

Given the change occurring at the federal level, and the energy and dedication I felt from other community organizers in the room, I got the sense that these goals have a strong likelihood of being achieved.